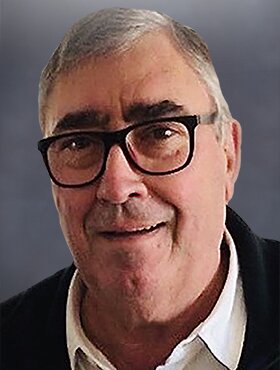 Bill Fasick, beloved husband of Pat Fasick (nee Smith), of Calgary, AB, passed away at the Peter Lougheed Centre on Saturday, June 4, 2022, at the age of 84 years.

Bill was born to Rose and John Fasick in Deadwood, AB, on November 11, 1937. He was the second of eight children. Migrating south, Bill eventually landed in Calgary, AB, where he was an avid curler at the Calgary Curling Club. Bill would make many long-time friends at the club, including those who set him up on a blind date with Pat. After a quick romance, they were married November 14, 1970.

He worked fulltime for Link Hardware in Calgary, AB, as a shipper/receiver, and then would go help a friend who owned a bike shop fixing bicycles until the wee hours of the morning. He soon realized he had a knack for fixing bikes, and with Pat’s support, they opened B&P Cycle and Sports in 1972.

Through the years at B&P, Bill would provide for his family, employ many of the kids from the community, and support countless sports organizations with donations of sporting goods and money. Bill believed in customer service and lived his values through his work. He believed if you look after the customer they would come back again, and again. To this day, B&P remains one of the premier bike and hockey shops in Calgary, where third and fourth generations are now customers. Brent now runs the shop and carries on Bill’s commitment to service with his son’s Aidan and Gavin.

Besides his loving wife, Bill is survived by his daughter Dorrie (Jon), his son Brent (Lisa), two grandsons, Aidan, and Gavin, two sisters, Helen, and Rosie, and numerous nieces and nephews.

A Celebration of Life will be held at McInnis & Holloway Hospitality Centre (Fish Creek, 14441 Bannister Road SE, Calgary, AB) on Sunday, June 19, 2022, at 3:00 p.m. With reception to follow. Condolences, memories, and photos can also be shared and viewed here.