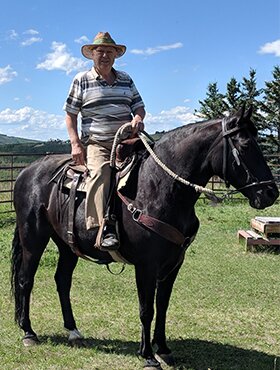 Nicola “Nick” Ricioppo beloved husband of Giuseppina (nee Vilardi) of Calgary, AB, passed away on Friday, June 3, 2022, at the age of 80 years.

Born in Cavallerizzo, Cosenza, Italy, Nick was the eldest of eight and from an early age, worked hard with his parents and siblings on their farm. He often reminisced about herding their goats and sheep through the mountains and the “trouble” he would get into with his brothers and friends. He never took his responsibility lightly though and would always ensure they safely made it back home at the end of a long day.

At 16, he started to grow restless and, never being one to shy away from adventure, he set off to join the circus in Northern Italy. After quickly realizing that circus life was not for him, he returned home with a few scars and many tales to tell. By the time he was 24, he had trained to be a chef in both Rome, Italy, and Cannes, France. It was clear he had found his passion. In 1966 he returned home to be married to his wife Giuseppina “Pina”. In 1968, Nick, along with his wife and, at the time, only daughter, Mira, immigrated to Calgary, Canada, from Italy.

Nick and Pina made a formidable team. They worked hard to make a life in Calgary, by working multiple jobs while raising a young and growing family. By 1971, they had four daughters under the age of four. Nick worked construction during the day and at night continued to pursue his dreams as a chef by working at Hy's Steakhouse, The Rotunda, and Marco's Restaurant. In 1977, Nick, Pina, and two friends partnered to open their first restaurant: Masters Dining Lounge in Penny Lane Mall. As successful as his life was becoming, he never forgot his family back in Italy. He wanted to give his brothers the same opportunity to flourish in Canada. Daniele, Beniamino, and Fedele followed in their brother’s footsteps and immigrated to Canada. Beniamino and Fedele worked along with Nick in his restaurants and later became successful restauranteurs in their own right.

In 1983, Nick and Pina opened The Calico Club, one of Calgary's most popular restaurants and lounges at the time. Beyond the incredible food, Nick’s natural ability to host and larger-than-life personality drew in many loyal patrons. In 1989, he decided to retire (for the first time) to pursue another dream; going back to his farming roots and raising cattle on his property outside the city. However, the passion he had for the restaurant business would not subside. In 2008, along with his wife and daughters, Nick decided to reopen La Casa d'Italia on Centre Street.  Running this classic Italian restaurant with his family was one of the highlights of his career. He was an amazing host to everyone that walked through the door and loved to create a warm and inviting experience for guests and staff alike, all of whom quickly became family to him.

In 2013, Nick finally decided it was time to really retire, knowing that he was leaving behind an incredible legacy in Calgary's restaurant and hospitality industry. One of his greatest loves was training and riding his horses, he even took up barrel racing “for fun”. He was also proud to be invited to ride his beloved horse Rocky in the Stampede Parade. Nick was also a sports fanatic and loved watching hockey and football. So deep was his knowledge of the game that in 1973 he was named an honorary Defensive Coach for the Calgary Stampeders. Nick had a passion for golf and took great pleasure in teaching his grandson how to play. He also enjoyed hunting, fishing, and travelling to Italy, Mexico, and Cuba with his family and friends. He was an avid gardener and would proudly share his harvest with friends and family. A true homesteader, he also loved making sausage, salami, prosciutto, and cheeses.

He was especially proud of his daughters and his grandchildren and took every opportunity to share the wisdom he gained from his vast and colorful life experience with them. He was fiercely devoted to his family. His siblings would often say that he was not only a brother, but because of his tremendous love and support, became more of a father figure to them. He will be most remembered for his love for his family, his big heart and charming personality, and his incredible generosity.

Besides his loving wife Pina, Nick is survived by his four daughters Mira (Vince), Ada, Anna, and Rita (Michael), all residing in Calgary, AB; and four grandchildren, Paolo, Catherine, Alyssa, and Emily.

Funeral Mass will be celebrated at Ascension Catholic Church (1100 Berkshire Boulevard NW, Calgary, AB), on Tuesday, June 14, 2022, at 11:30 a.m. Condolences, memories, and photos may be shared and viewed here.

The family would like to thank the staff of Unit 36 at the Foothills Hospital Special Services Building. If friends so desire, memorial tributes may be made directly to Unit 36 (Specify in ‘Comments’ Section) at the Foothills Medical Centre, 1403 29 Street NW, Calgary, AB T2N 2T9, https://secure.calgaryhealthtrust.ca/sslpage.aspx?pid=224

Share Your Memory of
Nicola
Upload Your Memory View All Memories
Be the first to upload a memory!
Share A Memory
Send Flowers