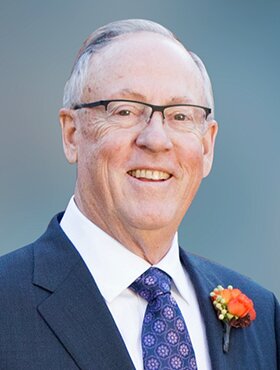 Tony Howard, beloved husband of Noreen Howard (nee Kirby) of Calgary, AB, passed away on Thursday, June 9, 2022 at the age of 79 years.

Son of Albert and Mary Howard (nee Davidson), he was born in Montreal, Quebec on September 12, 1942 and moved to Calgary with his family at the age of five, where he graduated from Central Collegiate Institute (1960). He received a Bachelor of Engineering at McGill (1964) and moved to California, completing his MBA at Stanford University in 1966. He and Noreen married July 9, 1966 as high school sweethearts, and moved to Montreal where Tony began his career with Montreal Engineering, with Noreen working as a teacher. They then moved to Ottawa, Ontario (1969) where he worked at the Ministry of Transport, which took them on several international assignments including to Kingston, Jamaica (1969-71), Barranquilla, Columbia (1971-74), and Kabul, Afghanistan (1974-75). During this time, he supported several aviation and agricultural projects, including short-term assignments in Bangladesh, Ecuador, Taiwan, Paraguay, Indonesia, and Cuba. Tony and Noreen returned to Montreal in 1975 and moved to Calgary in 1977, with Tony working in Management Consulting, where Ryan was born in 1979 and Karen in 1983. In 1986, he was appointed Vice President at TransAlta Utilities, later transferring to Agra Monenco in 1990 and then Stantec Consulting in 1997. After attempting to retire in 2000, he continued as an independent consultant for several more years. During his spare time and retirement, Tony was involved in multiple boards and philanthropic organizations, including The Rotary Club of Calgary, where he served as President, Mount Royal University, where he served on the board of governors, Calgary Airport Authority, Probus, and Camp 18 – The Corporation of Seven Wardens where he awarded the Iron Ring to his son Ryan in 2001. He served with APEGA as a member of the Council (1985-88) and as President (1993-94), and he was awarded the L.C. Charlesworth Award for his contributions. Tony also volunteered for the Ski Friends at Lake Louise for 25 years and was active in coaching and refereeing minor hockey. He enjoyed golfing as a member of the Calgary Golf and Country Club, camping with his family in Alberta and British Columbia, and was an avid amateur (HAM) radio operator with call sign VE6QY.

Tony is survived in Calgary by his wife Noreen of 55 years; brother Daryl Howard; daughter Karen D’Aloisio and son-in-law Derek D’Aloisio, who are expecting a child in August; and son Ryan Howard in London, UK; and numerous other family members and friends.

A private family service will be held followed by a Celebration of Life at a later date. Condolences, memories, and photos can also be shared and viewed here. The family wishes to send a special thank you to the staff at Southwood Care Centre Fairview unit for their care and compassion. If friends so desire, memorial donations may be made to the Rotary Club of Calgary Downtown 813 7 Street SW, Calgary, AB, T2P 2L5, Telephone: 587-328-1099 www.rotaryclubofcalgary.org.