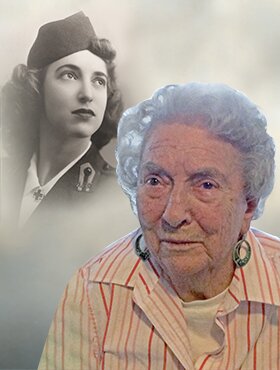 Peggy was born in Preston, Lancashire, England.  At the age of one she emigrated with her parents to the USA. At 10 years of age, following the death of her father 5 years earlier, she returned to England and lived with her grandparents, attending school there until age 16. Returning to the United States, she worked in New York. From 1944 to 1946 she served with the American Red Cross, and then spent three months volunteering in Europe.

In 1948 Peggy married John Raitt. They lived in Scotland where son Jonathan was born; in 1951 they emigrated to Calgary, where daughter Heather was born in 1952. Peggy enjoyed travelling and camping with her husband and young children in a Volkswagen van. This included three months in Europe in the late 50’s, before it became a popular thing to do. Peggy and John divorced in 1970.

For many years Peggy was employed at the U of C Department of Social Work, and was very proud to earn a BA in English in her late 50’s

Peggy volunteered with several organizations, including UNICEF. She was passionate about social justice and environmental protection and was a long-time member of the New Democratic Party of Canada, the Unitarian Church of Calgary, Project Ploughshares, Rocky Mountain Ramblers, and Skrastins Seniors Outdoor Club.

Thank you to the staff of the Edgemont Retirement Residence, and a special thank you to Bev Webber for caring for Peggy over several years.

A memorial service will be held at the Unitarian Church of Calgary, 1703-1st St, NW Calgary on July 17 at 1:00 pm. Memorial donations will be gratefully received by the Canadian Hard of Hearing Association, Calgary. Condolences, memories, and photos may be shared and viewed at www.McInnisandHolloway.com.

Share Your Memory of
Margaret "Peggy"
Upload Your Memory View All Memories
Be the first to upload a memory!
Share A Memory
Send Flowers