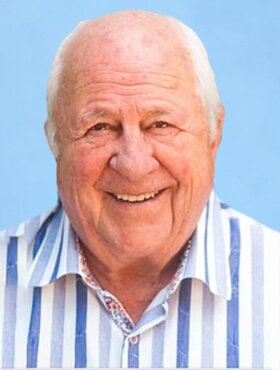 With profound sadness, strengthened by the unshakeable faith, courage, and unconditional love which we learned from him, we announce the passing of Lawrence (Larry) Koper on June 13, 2022.

Born in Kimberly BC, June 4th, 1929, to Mary and Mike Koper, Larry was raised in Kimberly to be an industrious, capable, responsible, forthright individual, who never backed away from his aspirations and engaged fully in life. Whether playing competitive hockey for the Kimberly Dynamiters, running his trap-line on what is now the Kimberly ski area, or forming lifelong relationships, he did everything, all in.

Larry wore many hats in his life. He was a wrangler, outfitter, teacher, school principal, and dedicated rancher who loved skiing and fishing until late in life. What he will be remembered for most, by the countless people he influenced, was his belief that every person could fulfill their unique potential, their authentic aspiration and every person deserved the very best support he could deliver to them. He defined what it is to be a masterful educator. He will live on forever through his investment in others.

Larry was a proud, loyal Rotary member. He joyously volunteered at The Calgary Stampede International Room, sold dream home tickets and formed enduring relationships with everyone who took the time to notice him. His smile, infectious laugh, his deep appreciation and respect for others is treasured by everyone who respected him as he respected them.

He remained close with a group of retired school Principals "The Crocks”, educational leaders distinguished by their deep commitment to doing what’s right for student learning in the face of any odds - no matter what anybody said. Larry was deeply disappointed that he missed their lunch date last month!

Larry, not only will we all miss your smile, your hearty laugh, and your big hugs, but also the pure joy and kindness you brought so naturally to everyone who engaged with you. No one who you truly touched will ever be far from you. You changed us all. You will be part of our hearts, always.

Give Mom a hug for us. We love you, Dad.

He was predeceased by his first wife, Janet Koper in 1988. He leaves to mourn his second wife Donna, his daughter Kathy (Tim), son Ron (Kathy), and son Mike (Chris). He also leaves his sister Anne (Larry) and brother Alexander (Jo), as well as his grandchildren Alison, Steven, Nick, Jessica, Elizabeth and Lauren and two great-grandchildren, Emilee and Kye. He will be missed by his stepchildren Trevor, Nancy, Robert and Lori.

Following his wishes, there will be no funeral service. Of course, after a respectful period of observance of those wishes, we’ll do precisely what you taught us, the right thing. There will be a party where you might be the topic of a lot of joyous, appreciative memories, and more than a little good scotch. Condolences, memories, and photos may be shared and viewed here.