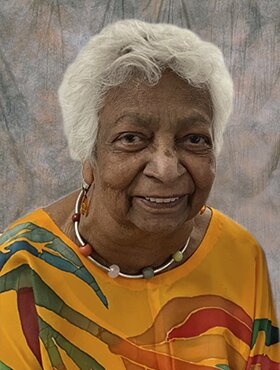 In lieu of flowers, friends and family can contribute to a scholarship honouring her legacy and supporting the continued education of future generations. Donations can be made at https://gofund.me/1cd47267.

Myra Weeratne (née Senaratne), of Calgary, Alberta, passed away on Wednesday, June 15, 2022, at the age of 93. A mother, grandmother, great-grandmother, sister, wife, aunt, and teacher, Myra leaves behind a legacy of love, generosity, and lifelong learning.

Myra was passionate about her faith, education, the arts, and the game of Scrabble. She attended the University of Colombo and graduated from the University of Peredeniya, with a Bachelor of Arts in English, Latin, and Sanskrit. It was there that she met and married the love of her life, Bandula (“Bandu”), who shared her love of education, philosophy, charity, and investing in future generations.

Myra loved theatre (and drama, both on, and off-stage), and her love of literature and elocution was passed down to her children, grandchildren, and students, who fondly remember reciting Wordsworth and T.S. Eliot, with her guidance. Family gatherings were full of laughter as she organized skits and creative games for everyone, with her signature sense of humour.

As a teacher Myra’s commitment was not limited to the classroom. She invested in the lives of her students by producing school plays, coaching netball, teaching embroidery, and organizing many other extracurricular activities with admirable dedication.

Myra was also fiercely independent, breaking boundaries and challenging traditions throughout her life. When it was frowned upon for women to drive, Myra drove. And long before the idea of a “working mom” was accepted, Myra built a meaningful career. She and Bandu were committed to ensuring their three girls could do the same, empowering them to choose their own paths.

In her nine decades, Myra called many places home. Her adventurous spirit led her to live and work on four different continents, creating deep connections and lasting friendships on each.

As a child she moved all over Sri Lanka with her family. Due to the demands of Bandu’s career as an Air Force officer, she moved around the country and even across the ocean to England (where she famously worked in a British fruit factory). From 1980 to 1982, Myra also taught English in Maiduguri, Nigeria. Finally, in 1998, at the age of 69, she immigrated to North America, where she built a new life in Calgary. She also spent considerable time with family in Massachusetts, building a network of vibrant friendships.

No matter where she lived, Myra created a home where everyone was welcome. Extended family, friends, and friends of friends were always invited to share a meal or join a party. Myra and Bandu were accepting of all people and cultures, unafraid to break from tradition to do what was right. They put their progressive beliefs into practice through radical hospitality and a constant willingness to engage with the struggles of others.

Myra will be remembered for her fun-loving spunk, her sense of humour, her resilience, and her boldness. Her three daughters, grandchildren, great-grandchildren, countless friends, and many nieces and nephews, will cherish her memory every time they gather to eat, sing, laugh, and celebrate family.

She is joining her beloved Bandu, parents, siblings, and nieces who, as she would say, are “waiting on the other side of the Jordan.”

In lieu of flowers, friends and family can contribute to a scholarship honouring her legacy and supporting the continued education of future generations. Donations can be made at https://gofund.me/1cd47267.

A Private Funeral Service will be held on, Thursday, June 23, 2022, at 10:30 a.m. MST.  Family and friends who are unable to attend in person are invited to join Mrs. Weeratne’s service streamed live (see below) on the day of the service. For those who are unable to view live, a recording of the service will be posted for 90 days. Condolences, memories, and photos can also be shared and viewed here.

Share Your Memory of
Myra
Upload Your Memory View All Memories
Be the first to upload a memory!
Share A Memory