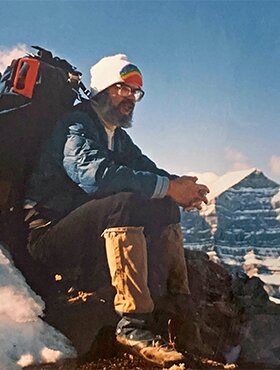 Chelsea Donald Robert Losee MacAlpine, of Calgary, Alberta, Canada passed away unexpectedly from a stroke on June 18, 2022 at 82 years old.

Donald, (Don) MacAlpine was born May 4, 1940 in Woodstock, Ontario.  He was a precocious child who was later a member of the Sea Cadets and served on a minesweeper in the 1950's.  He was a trained and talented Power Engineer who later studied psychology at McMaster University. He travelled West and settled in Calgary, Alberta.  In Calgary, Don was an accomplished Chief Engineer at the Four Seasons Hotel and convention center.  He rounded out his career working at the Foothills Hospital.

Don discovered a love of the outdoors that occupied much of his free time. He regularly hiked, cross-country skied, and climbed many a frozen waterfall.  His love of the outdoors was only eclipsed by his love of road biking and motorcycles.  Don completed both the Silver and Golden Triangles which were long-distance road bike races.  He also rode his motorcycle from Canada's West to East coast and had many adventures on his motorbike.

Don was a good-natured man who always knew how to fix everything and could crack dad-jokes on the fly. He will be truly missed by all those who loved him.

Share Your Memory of
Don
Upload Your Memory View All Memories
Be the first to upload a memory!
Share A Memory
Send Flowers