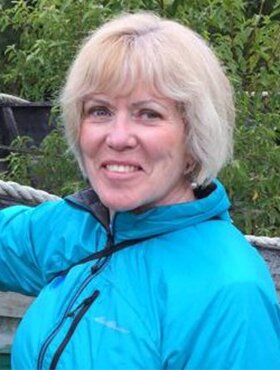 Bev was born in Winnipeg, MB on July 17, 1950, to Isabel and Lloyd Jones. Winnipeg is also where she completed all of her schooling and met her husband George, with whom she would go on to spend her next 45 years. At a young age, Bev began working with the U.S. Government and when the U.S. Consulate in Winnipeg closed, Bev, along with her family, relocated to Calgary where she continued to work with the U.S. Consulate until her retirement in 2015. She began working in the Visa section but quickly moved into IT where she was able to participate in various training programs and achieve multiple IT related designations. Bev was also able to travel to different parts of the world to provide her computer expertise during official Presidential visits and conferences.

Bev is survived by her husband George, son Jonathan (Wanda Weise) of Airdrie and their three children, Jade, Cody and Hailee, and daughter Melanie (Simon Walker) of Calgary and their two children Lennon and Bruno. She is also survived by her sister-in-law Barbara as well as numerous cousins, nieces, and nephews. Bev was preceded in death by her father Lloyd in 1996, her mother Isabel in 2013 and her brother Robert in 2012.

When Bev was not reading, golfing, helping others with their computers or line dancing, you were sure to find her playing MahJong with her friends or sewing yet another quilt for her grandchildren. In her early life, Bev was very involved in her daughter's various soccer teams, acting as team manager or team "soccer mom". She and her husband George were eager to support their children and you could always find them on the sidelines or stands at every game. Later, in retirement, Bev and George began travelling and cruising through Europe, South America with multiple trips to their favorite spot in Mexico - Neuvo Vallarta. When Bev was home, she was very invested in her community, serving on various committees at her community living condo complex, and participating in various activities (gardening, book club, social club, etc.)

Bev loved having her family all together, acting as the planner extraordinaire for holiday gatherings, family vacations, and Sunday evening meals. Being originally from Winnipeg, Bev and her family would travel back to Manitoba regularly to visit Falcon Lake where many good memories were made with her brother Bob, sister-in-law Barb and their kids and grandkids. Bev (Nana) particularly enjoyed spending time with her grandchildren whether she was on the floor playing cars or reading bedtime stories. Bev always made an impression on anyone she would meet and formed many lifelong friendships over the years. She will be sorely missed by all who knew and met her.

Funeral Services will be held at McInnis & Holloway (Fish Creek, 14441 Bannister Road SE, Calgary, AB) on Tuesday, July 5, 2022 at 2:00 p.m. Family and friends who are unable to attend in person are invited to join Mrs. Matte's service streamed live (see below) on the day of the service. For those who are unable to view live, a recording of the service will be posted. Condolences, memories, and photos can also be shared and viewed here.

Share Your Memory of
Beverly
Upload Your Memory View All Memories
Be the first to upload a memory!
Share A Memory
Send Flowers