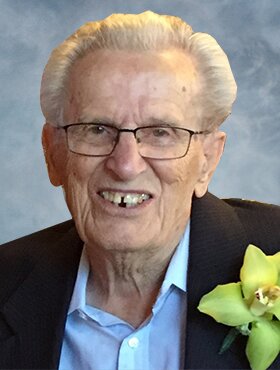 Walter Powell, beloved husband of Olga (nee Gregory) of Calgary, AB, passed away on Wednesday, July 6, 2022, at the age of 97 years.

Walter graduated and received a Bachelor of Commerce from the University of British Columbia. He worked for numerous years as an accountant at Gulf Oil.

Walter enjoyed golfing, gardening, curling, bowling, and was a big fan of sports, especially the Calgary Flames and Calgary Stampeders. Dad could fix anything, and single-handedly built the solarium at the house on Chicoutimi Drive.

Walter’s most memorable vacation was when he went to Maui, Hawaii; he also loved his trips to the Redstreak Campground in Radium Hot Springs, BC, and his cruise to Alaska, and family get togethers at Bonnie Lake.

Walter married Olga in 1949 and they would have celebrated their 73rd wedding anniversary on July 30th.

Walter is also survived by his two sisters; Josephine and Olga, as well as numerous extended family and friends.

Walter was predeceased by his brothers; Paul, Steve, Frank, Andrew,  Stan, and Sid; and his sisters; Barbara and Rose.

Relatives and friends are invited to Prayers and Tributes at McInnis & Holloway (Crowfoot, 82 Crowfoot Circle NW, Calgary, AB) on Wednesday July 13, 2022 at 7:00 p.m.

Funeral Mass will be held at Ascension Catholic Church (1100 Berkshire Boulevard N.W., Calgary, AB), on Thursday, July 14, 2022 at 11:30 a.m. Reception to follow the Funeral Mass at the church. Graveside Service to follow the reception at Queens Park Cemetery. Condolences, memories, and photos may be shared and viewed here.