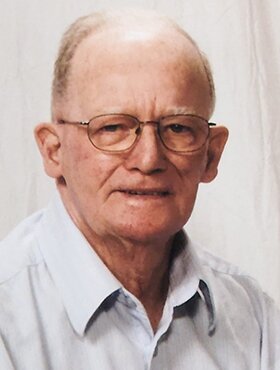 Rod was born at the High River Hospital and was the youngest of five children. He lived in Aldersyde until they moved to the hamlet of Midnapore where he attended school.

Rod married Dorothy Gladys Morrison in 1952 and remained in Midnapore where they raised a family of five before moving to Okotoks in 1998.

Rod accomplished much throughout his life; he enjoyed hunting, baseball, curling, golf, and bowling and was particularly proud of his woodworking and building skills. He made side tables and crib boards for his family and built a camper which the whole family enjoyed.

Rod worked as a Steamfitter and Estimator for Trotter & Morton for over 40 years before his retirement and was a proud member of Local Union 496 for 70 years.

In Rod and Dot’s retirement they purchased a motorhome and travelled to Yuma, Casa Grande, Laughlin and Reno, enjoying the casinos and travelling with their friends and family.

He will be remembered for his humor and storytelling; he always ended up laughing so hard he could barely finish the story.

Roderick was predeceased by his wife Dorothy, parents Tom and Edith Brown, daughter-in-law Marilyn, his four siblings and their spouses.

A celebration of life will be held for Rod and Dot at a later date. Condolences, memories, and photos may be shared and viewed here.

Share Your Memory of
Rod
Upload Your Memory View All Memories
Be the first to upload a memory!
Share A Memory
Send Flowers