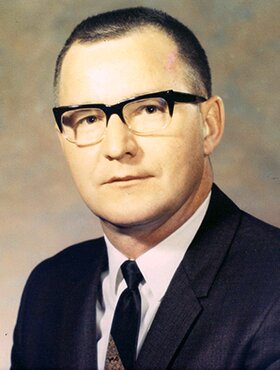 Dad was born in Antler, Saskatchewan on January 11, 1929; the fourth child of William Thomas Kennedy and Emma Leist. He was raised in rural Saskatchewan with eight sisters and brothers. His father taught him how to work hard and how to persevere, qualities he would carry with him the rest of his life.

Dad worked on the family farm until his late teens when the burgeoning oil industry lured him away.  He started as a ‘rough neck’ but soon moved up to ‘mud’ engineer. Despite his lack of formal education, dad had a good mind for numbers.

Mom and dad met in Estevan, Saskatchewan in 1952 where Mom was working as the matron at the local hospital.  Mom was raised in a strict religious family, and she found dad’s outgoing nature and charm attractive; they married in 1955.  A few years later, they had their first two children, Brian, and Richard.

Dad’s work took him all over the world including the middle east.  Here, mom gave birth to her third child, Marianna. His adventurous spirit found him working in different parts of the world, including England, Portugal, and New Zealand. His ability to tell a funny story, or joke made him friends everywhere he went. Almost everybody who knows dad has a story about him. Mom and dad had their ups and downs, but eventually decided to part ways after returning from the middle east.

Dad liked curling, country music, and baseball.  Mickey Mantle was his favorite player. Later he enjoyed playing golf and would occasionally sneak out in the middle of the week to get in a few holes before heading home.  This did not always sit well with his wife.

We will miss your good nature, your ability to make us laugh, and that strange thing you did that you called dancing.

MAY THE ROAD RISE UP TO MEET YOU.

MAY THE WIND BE ALWAYS AT YOUR BACK.

MAY THE SUNSHINE WARM UPON YOUR FACE.

THE RAINS FALL SOFT UPON YOUR FIELDS

AND, UNTIL WE MEET AGAIN,

MAY GOD HOLD YOU IN THE PALM OF HIS HAND.

Dad is survived by his children Brian, Richard, and Marianna as well as his siblings, Mable, Sadi, Eddie, and Alfred.

Funeral Services will be held at McInnis & Holloway (Park Memorial, 5008 Elbow Drive SW, Calgary, AB) on Tuesday, July 19, 2022, at 2:00 p.m. Reception to follow in the Hospitality Centre at the Funeral Home. Condolences, memories, and photos can also be shared and viewed here.

The family has requested that remembrances be made in the form of contributions to The Alzheimer’s Association of Canada. Donations can be made at https://alzheimer.ca/en/take-action/donate