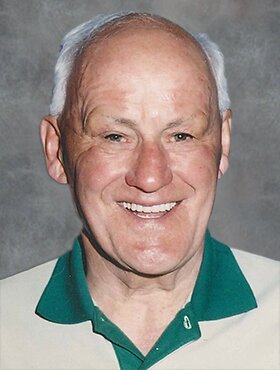 Allan Moore our beloved father, grandpa, uncle and friend, passed away peacefully at Calgary’s Brentwood Care Centre on Sunday, July 10, 2022 at the age of 96 years.

Al was born in Barons, Alberta and raised in Carmangay, where he graduated high school. He worked briefly in the oil fields, but his career was in the grain business. He worked for Alberta Wheat Pool as a grain buyer in Pultney and Milo, and as a Traveling Superintendent in Peace River before moving to Calgary to finish his career.

Al took early retirement at the age of 57, and he and Dorothy discovered their passion for the outdoor activities they both so loved. They spent many happy times with friends and family hiking, canoeing, camping, cross-country skiing, and curling. Al was very proud of their beautiful backyard, which he and Dorothy worked so hard to maintain. They both enjoyed making wine and beer. Al made wine until he was 95 years old. Dorothy and Al were long-time members of the Thornview Seniors, where he was in charge of membership for many years. He also worked the Bingo there and received a Minister’s Seniors Service Award in 2002 for his volunteer work. He loved playing whist at Thornview on Fridays and compiled many of his beloved tapes there over the years. This music brought him so much joy in his 80s and 90s. He often said that he had no idea that the music he recorded in this 70s would mean so much to him later in his life.

Al dearly loved his grandchildren and great-grandchildren, and was so proud of them. He enjoyed playing cribbage at family gatherings and loved interacting with his great-grandchildren. Al loved baseball and whistling and loved to share many “old rural” sayings. He will be remembered as a dapper dresser and for his meticulous ways. His license plate was PERFEKT, which he thought was great because he wasn’t quite perfect.

Al is survived and lovingly remembered by his daughter Sylvia (Dennis Wheatley), Donna Newall , whom he considered his second daughter; his granddaughter Nicole (Kevin) Nielsen, grandson Derek (Heather) Wheatley, and granddaughter Lori (Jason) McDougall; nine great-grandchildren; and his sister-in-law Carole Dahl. Al was happily married to Dorothy (nee Childress) for 68 years. He was one of nine children and was predeceased by his two sisters and six brothers.

Al’s family thanks the caring staff at Brentwood Care Centre for the excellent care he received. At his request a memorial service will not be held. Condolences, memories, and photos may be shared and viewed here.

Share Your Memory of
Allan
Upload Your Memory View All Memories
Be the first to upload a memory!
Share A Memory
Send Flowers