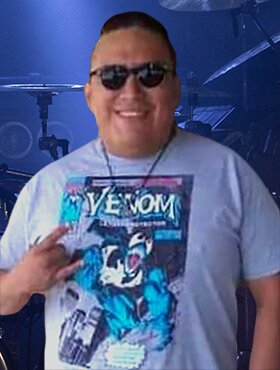 We are sad to announce the sudden passing of our beloved Daniel on July 9th 2022, at the age of 36 years. Daniel left this world with family by his side as he took his last breath and was embraced by his maker.

Born in Mînîthnî, Daniel was raised in the Ozada Flats church where he chose to be baptized and found his lifelong passion of music. A talented and skilled drummer, Daniel was a member of the band Soggy Moccasins, with whom he loved to travel and perform. Daniel had an open heart to the world, he also learned traditional drumming and participated in the  Chiniki Lake group.

Daniel was a gifted athlete and was an award-winning minor hockey player in his younger years. His spirit of adventure brought him to many pursuits including acting, hiking, youth work, video gaming, and attending metal shows.

Daniel was well known for his sense of humour, he loved to play with boundaries to make people laugh. He could have a room in stitches and had a natural charisma that many people were drawn to and loved. He often used his larger-than-life personality to bring cheer to the dark times, and to bring light to those suffering.

Daniel was a loving father to his son Odin who he cherished deeply. Many more young people looked up to him as a beloved uncle and cousin. He will be profoundly missed by his loving parents Bernice Chiniquay (Johnny) and Patrick Twoyoungmen, grandmother Helen Chiniquay, siblings Chris (Grace), Taryn, Chloe (Jordan), Joel, Holly, and Jarret (Amanda) and their children. He is survived by his son, and special nephews Charlie and Xavier, close auntie Brenda, special cousins and childhood friends Krissy Chiniquay, Tysa Twoyoungmen, Ian Poucette, and Orneil "smee" Rollinmud. Daniel was cared for by members of the Twoyoungmen, Wesley, Rollinmud, Chiniquay, Hunter, Poucette, Simeon, Kaquitts, Baptiste, Holloway, Amos, and Salter families as well as the Dixon and Lefthand families from Eden Valley. Daniel also had many close friends from other reserves, and who lived in downtown Calgary. We apologize for anyone we missed.

The family wishes to thank the staff at Rockyview Hospital, as well as the individuals working for various organizations who did their best to support Daniel over the years. The family welcomes all who cared for Daniel to join in the celebration of his life and our love for him.

Share Your Memory of
Daniel
Upload Your Memory View All Memories
Be the first to upload a memory!
Share A Memory
Send Flowers