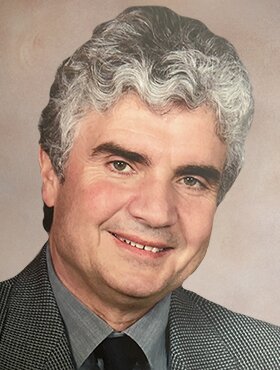 After a valiant fight, Orlando Russo, age 69, passed away peacefully on Sunday, July 17, 2022, in Calgary, AB with his loving wife Carmela at his side.

Orlando was born in Pietramelara, Caserta, Italy. He lived and worked in Zurich, Switzerland in his teens. In August 1973, at age 19, he came to Calgary, to visit his sister, Maria, and met his sweetheart, Carmela Muzzo. They were married in October 1974. They have two sons, Fiorenzo (Maria) and Nicolas (Jaclyn Gardiner); and two grandchildren, Orlando and Serastella Russo.

Family was the most important love to Orlando. He lived his entire married life next door to his in-laws and loved his Muzzo family like his own. In later years, he and Carmela would take annual trips to Pietramelara to visit Orlando’s family and friends. Orlando welcomed everyone who walked through his door with a warm smile, making you feel that you were part of his family. He lived his entire life to love, protect, and do anything for this family.

Orlando began work with his father-in-law, Nick Muzzo, at CP Rail. During the day, Orlando built and maintained track; in the evenings, he studied English to embrace Canada as his new home. Orlando worked hard at everything he did and set a great example for his boys. Orlando’s work ethic and integrity were noticed by the City of Calgary who recruited him in 1983 to join their team on the NE leg of the LRT project. Orlando was precise, dedicated, hardworking, and a proud employee with the City of Calgary. He retired as the Project Officer for Engineering Support with Calgary Transit Infrastructure Division in July 2021.

Orlando looked forward to retirement, planning to spend more time in Italy with Carmela. He was especially excited to bring his children and grandchildren along. Those dreams were interrupted by the pandemic and then tragically, by the onset of a very rare and aggressive lymphoma which he bravely fought without complaint.

Orlando was a member of the Knights of Columbus (4th degree Knight). He valued structure, organization, and timeliness. He loved making wine with his sons every September. His grandchildren were the light of his life and he loved having them live a block away so he could hug them daily. He was loved by many of us, but his heart always belongs to Carmela. He will be remembered as a gentle and kind man of faith who was utterly devoted to his family.

In addition to his immediate family, Orlando was survived by his sister Maria, brother Luigi, brothers-in-law Dante, and John Muzzo (Diane Anderson); sister-in-law Lori Muzzo, and many nieces, nephews, and friends in Canada and Italy. He was predeceased by his father Fiorenzo, mother Antonietta, brothers Costantino and Mario; Carmela’s parents Nicola and Genoveffa Muzzo; and brothers-in-law, Rudolfo Muzzo and Vince Izzo.

Funeral Mass will be celebrated at Mary, Mother of the Redeemer Parish (1714 – 14th Avenue N.E., Calgary, AB) on Friday, July 22, 2022, at 10:00 a.m. Graveside Service to follow at Queen’s Park Mausoleum. If friends so desire, memorial tributes may be made directly to the Alberta Cancer Foundation, c/o Tom Baker Cancer Centre, 1331 - 29 Street N.W., Calgary, AB T2N 4N2 Telephone: 1 (866) 412-4222.  www.albertacancer.ca/memorial or a charity of your choice. Condolences, memories, and photos may be shared and viewed at www.McInnisandHolloway.com.

Share Your Memory of
Orlando
Upload Your Memory View All Memories
Be the first to upload a memory!
Share A Memory
Send Flowers