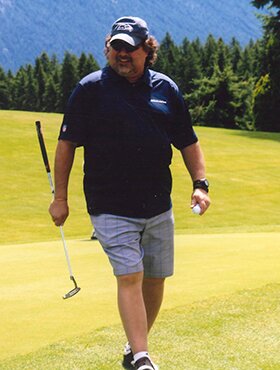 Ken was born in Calgary, AB, on September 29, 1957. He grew up in the Banff Trail community of Calgary where he spent many years playing hockey and supporting the organization. He was a proud graduate of William Aberhart High School. Ken received his diploma in Automotive Technology from SAIT and worked as a Mechanic with the Calgary Police Service for thirty-five years.

Ken met Gail during their high school years, they were married in 1981 and shared forty-one loving years together. They welcomed their son Brent in 1987. As a family, they loved to travel, and during Brent’s school years they vacationed in Invermere and Vancouver, BC, as well as in Europe. In later years, Ken and Gail would enjoy their annual trips to Palm Springs, CA. Ken and Brent also travelled to see sporting events in Toronto, Nashville, and Philadelphia to see his beloved Flyers. Ken also enjoyed his annual cousins’ golf trips with his British Columbia and Alberta family as well as many golf trips with his buddies (who he always lovingly allowed to win). Ken was a long-time member of the Ogden Lushes Hockey team, where he made lifelong friendships.

Funeral Services will be held at McInnis & Holloway (Chapel of The Bells, 2720 Centre Street North, Calgary, AB), on Tuesday, July 26, 2022, at 2:00 p.m. Reception to follow in the Hospitality Centre at the Funeral Home. Family and friends who are unable to attend in person are invited to join Mr. Tebin’s service streamed live on the day of the service at www.McInnisandHolloway.com. For those who are unable to view live, a recording of the service will be posted. Condolences, memories, and photos may also be shared and viewed there.