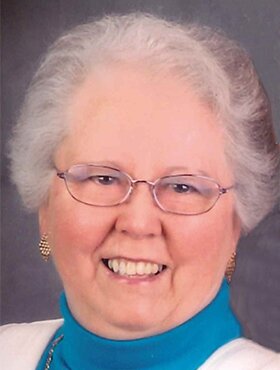 Melba Marsden, beloved mother, grandmother, and great-grandmother, passed away on Monday, July 25, 2022, at the age of 89 years.

She grew up in Burgeo, during the Depression and the Second World War. In 1949 Newfoundland joined Canada, and soon after in 1950, she moved to Halifax, joining her sister Maisie. She was only 17.

In Halifax at a Y.M.C.A. dance in 1951, she met a handsome sailor from Calgary, AB, and they fell in love and were married in 1953. After the birth of their first child in 1955, Ernie left the Navy and they moved back to Calgary the next year and settled into married and civilian life. Melba and Ernie raised four children in their Parkdale home.

She was a loyal and conscientious member of the congregation of St. Andrew’s Anglican Church for over fifty years serving on the Women’s Auxiliary group. Later, she was also a very active member of the “Nifty Fifties” group in her community of Parkdale as well as helping with cubs, brownies and hockey. At this time, she actively raised two grandsons at their home in Parkdale. Melba was always helping where necessary.

Melba accomplished much through her life and was particularly proud of her children, grandchildren, and great-grandchildren.

Melba enjoyed sewing, knitting, and crocheting, she created most of her wardrobe, and that of her children growing up. Her family received many creations over the years, including but not limited to pajamas, shirts, dresses, and costumes. For Christmas one year, each of her children, their spouses and each grandchild received a knitted blanket which we all still cherish. Ernie for his part said that he purchased the yarn and brought Melba tea to relax while she worked away. Melba could often be found in her work room, first in the kitchen and later when the kids had moved, in the basement.

Melba on her own started providing outfits for premature babies at Calgary hospitals. Warm knitted outfits with toques, pants and tops. This initiative of love has been carried on by others since 1985. She also crocheted hangings for the church and at a hospice in thanks.

Melba’s most memorable vacations were when she and Ernie travelled to Europe on two trips. One all in the British Isles, visiting extended family. The second visiting Canadian military sites in France, Holland and Belgium. Other than the occasional trip home to Newfoundland, it was the furthest and longest she was away from family. They also enjoyed trips to BC and to northern Alberta and to visit friends and family in Saskatchewan, Manitoba and Ontario.

Melba was predeceased by her husband Ernie in 2007, her daughter Sheila in 2005, her parents, and brothers, Roy and George.

A Celebration of Melba’s Life will be held at St. Andrew’s Anglican Church (1611 St. Andrew’s Place N. W., Calgary, AB), on Tuesday, August 2, 2022, at 2:00 p.m. Family and friends who are unable to attend in person are invited to join Mrs. Marsden’s service streamed live (see below) on the day of the service. For those who are unable to view live, a recording of the service will be posted. Reception to follow in the Church Hall at the church. A Private family graveside will follow later. Condolences, memories, and photos may be shared and viewed here.

Share Your Memory of
Melba
Upload Your Memory View All Memories
Be the first to upload a memory!
Share A Memory
Send Flowers