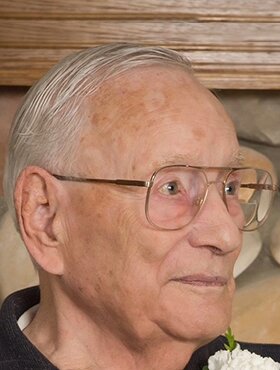 Jack Betteridge passed away in Calgary, AB, on July 26, 2022, of natural causes just a couple months after his 90th birthday, and a few months shy of his and Marg’s 68th wedding anniversary.

Born and raised in Calgary, Jack was the eldest of 10 children and spent most of his adult life working for Imperial Oil Limited, primarily out of Edmonton, AB, Inuvik, NWT, and Calgary, AB. In 1987, he took early retirement and he and Marg moved full-time to Sylvan Lake where they enjoyed many happy years traveling to Arizona for the winter and spending summers “at the lake” before moving back to Calgary in 2020. Jack loved to laugh, and he kept his sharp mind, quick wit, and questionable sense of humour even in his final days.

He is survived by his loving wife, Marg, daughter Jan (Tom); sons, Mike, and Bob (Roseanne); 7 grandsons, Ryan (Jenn), Dan (Barb), James (Cristy), Chris (Tia), Jake, Oliver, and Lewis; as well as 7 great-grandchildren. He was predeceased by daughter, Laurie (1988) and 7 of his 9 siblings, most recently, his brother Bob just last month.

A Memorial Service will be held at McInnis & Holloway (Chapel of The Bells, 2720 Centre Street North, Calgary, AB), on Saturday, August 27, 2022, at 2:30 p.m. Reception to follow in the Hospitality Centre at the Funeral Home. Condolences, memories, and photos may be shared and viewed here.