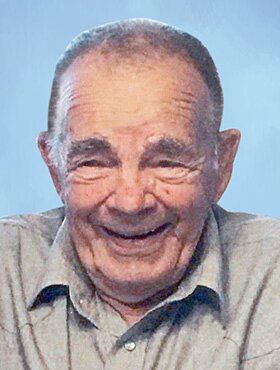 Rudolph “Rudy” Audenaert, beloved father, boyfriend, brother, uncle, grandfather, and great-grandfather, passed away peacefully in his sleep at the Olds Hospital on Monday, August 1, 2022, at the age of 94.

Rudy was predeceased by his wife Ricky, his son Rudy, his parents, and his brothers. Rudy will be remembered for his sparkling blue eyes and infectious smile.

Born in Raymond, Alberta, to a farming family, Rudy grew up working in the sugar beet fields. Rudy was a decorated athlete in long distance running and hockey, even being inducted into the Raymond Sports Hall of Fame. Rudy was married in Raymond and moved to Calgary with his wife and two young children where he started with Canada Post. After retiring as Postmaster in Linden, he continued to work numerous jobs in Olds and played slow-pitch well into his 80’s.

A Celebration of Rudy’s Life will be held at McInnis & Holloway (Fish Creek, 14441 Bannister Road SE, Calgary, AB) on what would have been his 95th birthday, Friday, September 30, 2022, at 11:00 a.m. Reception with a light lunch to follow in the Hospitality Centre at the Funeral Home. Condolences, memories, and photos may be shared and viewed here.