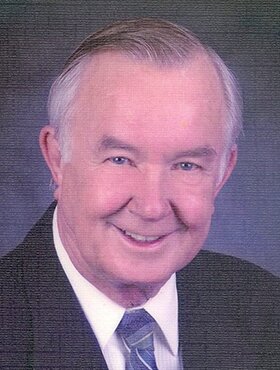 Robert was born in Ottawa, ON on January 11, 1932, to Percy C and Mary Agnes (nee Prindiville). He attended Ottawa Technical High School and served in the Korean Conflict with Canadian PPLI and is a veteran of the Korean conflict. He worked in the printing industry for over 40 years with Western Printing and Lithographic/Ronalds Western-Quebecor as plant foreman and manager until his retirement (1992) in Calgary.

He will be missed by his life companion and wife Rose (nee Steele). Survived by his two sons and daughters-in-law, Christopher and Janet (nee Snider) and James and Nancy (nee Schneider); three daughters and one son-in-law, Elizabeth “Peggy” (Michael McPhail-deceased), Debra Ann (Wade Wallace) and Linda. He is also survived by his brother Gordon (Barbara nee Curry), as well several nephews, nieces, grandchildren and great-grandchildren. He was predeceased by his parents, Percy C and Mary Agnes; sister Francis (Richard White), and brother Donald (Audrey nee Smith).

Funeral Mass will be celebrated at Holy Spirit Catholic Church (10827 – 24th Street S.W., Calgary, AB) on Wednesday, August 31, 2022, at 11:00 a.m. With reception to follow at the church. Family and friends who are unable to attend in person are invited to join Robert’s service streamed live (below) on the day of the service. For those who are unable to view live, a recording of the service will be posted. Condolences, memories, and photos may also be shared and viewed here.

Share Your Memory of
Bob
Upload Your Memory View All Memories
Be the first to upload a memory!
Share A Memory
Send Flowers