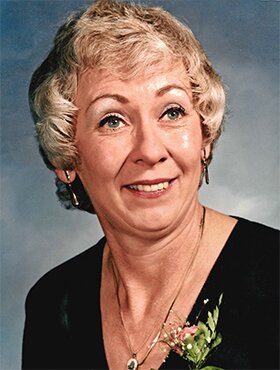 Dixie Bradley (nee Snell), beloved wife of Stuart Bradley for 65 years, of Cochrane, AB, passed away in Canmore on Monday, August 8, 2022, at the age of 86 years, surrounded by the beautiful Rocky Mountains.

Dixie was born in Calgary, AB, on September 28, 1935, daughter of Betty and Les Snell. Dixie was predeceased by her younger brother, Leslie Eric, in 2014. She met Stuart in the Crescent Heights neighbourhood, where they lived two blocks apart and both attended Crescent Heights High School. Dixie trained as a secretary, a position she maintained throughout her career.  Dixie and Stuart were married on June 29, 1957, and Dixie gave birth to three children, Shannon (Bryan Green), Laura (Pat Smith), and Jason (Marci) Bradley.

In 1968, they moved to the Springbank community to run Bradville Kennels. Then in 1975, Dixie returned to work at Springbank Community High School, where she quickly earned the reputation for being one of the most efficient secretaries in the school division. She remained there for the next 22 years, retiring in 1997, where her principal named her the “First Lady of Springbank”. As much as she enjoyed her career and being a mother, nothing compared to the thrill she had in becoming a grandma! 1988 started an amazing run, where every year saw a new grandchild, she will be deeply missed by Kai, Tieran (Kelsey and Ryland), Corbin, Miranda, Blake, Cherilyn (Michael and Ezra), and Noah.

She was an all-star fan; for hockey, T-ball, lacrosse, soccer, rowing, swimming, rugby, basketball, volleyball, running, track, marching band, football, parades, and concerts. Dixie loved to curl and held season’s tickets to the Stamps and Flames. Dixie will be sadly missed by her family, friends, and neighbours in both the Springbank and Cochrane areas.

Funeral Services will be held at Cochrane Alliance Church (902 Glenbow Dr, Cochrane, AB), on Friday, August 12, 2022, at 2:00 p.m. Reception to follow in the Church Hall. Condolences, memories, and photos may be shared and viewed here.

Share Your Memory of
Dixie
Upload Your Memory View All Memories
Be the first to upload a memory!
Share A Memory
Send Flowers