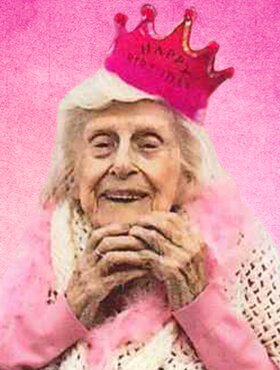 It is with a peaceful, and easy feeling, we wish Rosaline a speedy journey home. Margaret “Rosaline” Bartley of Calgary, AB passed away at the remarkable age of 100 years on Friday, August 19, 2022.

Rosaline was born on September 23, 1921, in Bingley Yorkshire, Great Britain. She was the eldest of three girls.

Rosaline met Joseph in 1945 and were married shortly thereafter. They were married for 55 years until Joe’s passing. In 1948, they welcomed a beautiful blonde-haired baby girl, Loretta to their home. Tragedy struck, two years later and they lost Loretta. This would forever change the course of their lives. 1953 was the year they packed up and immigrated to Canada, landing on the eastern coast they longed for a little more, to Calgary they came.

They entered a partnership and opened a bakery. The Alpine bakery was well known throughout the neighborhood. Rosaline being the baker’s assistant, delivered baked goods near and far. Many children in Haysboro would remember their baked gingerbread men. Along with getting the bakery up and running, came them purchasing their home also in Haysboro.

Rosaline moved on to a career of her own, starting out as a typist with different firms in Calgary. Later, moving on to legal secretary with various lawyers in Calgary. She was a wiz at typing and shorthand. Along with working her regular day job, Rosaline devoted many hours to volunteering. She loved to sit with, pray or sing along with many a WWII vet at the Colonel Belcher.

Rosaline was a friend to all. She had a fabulous sense of humour. There wasn’t a dog that Rosaline didn’t befriend. Their house was always filled with one or two. They even had a talking myna bird, that loved to get the dogs going. When Rosaline and Joe retired fully, they set their sights on traveling; off to the West Coast, they went settling in Victoria. Cherry Point Marina was where they spent many days basking in the sun. Joe was the captain of his own boat, and they thoroughly enjoyed all time spent with their new friends on the water. Rosaline was a long-standing member of the Royal Canadian Legion along with Joe.

A Funeral Mass will be celebrated at St. Gerard’s Catholic Church (8944 Elbow Drive S.W., Calgary, AB) on Friday, September 23, 2022, at 11:00 a.m. Reception to follow. Family and friends who are unable to attend in person are invited to join Ms. Bartley’s Mass streamed live via YouTube: https://www.youtube.com/watch?v=hNWncVWATxY on the day of the service. Condolences, memories, and photos can also be shared and viewed here.

The family wishes to thank, the Southwood Care Centre staff and Doctors, the love and compassionate care she received were immeasurable.

In closing, many of you may be wondering how this lady born and reared in England came to be so fond of the Irish. You know Rosaline never told me so but I’m sure it
was the twinkle in her eye and the love of every animal, man, woman, and child. She had a heart of gold. Some say she was a treasure.

Share Your Memory of
Rosaline / Lovey
Upload Your Memory View All Memories
Be the first to upload a memory!
Share A Memory
Send Flowers