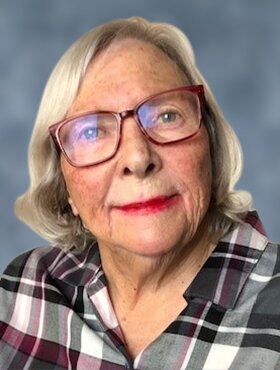 Since her birth on May 9, 1931, she charged through her life pursuing her passions with verve and aplomb. The daughter of Lily and Fred Lepper and sister of Ileene, she enjoyed her early life on the edge of Calgary in Hillhurst, which is now in the middle of the city. She and Ileene enjoyed riding their horses in the nearby fields.

As a young adult she decided to put on a backpack and travel in Europe, which, at that time, was an unadvisable act for a young woman. She charged into that to the dismay of her fretful mother, taking several trips during her 20s. At this time, she had also caught the skiing bug and was spending time skiing in Banff and swooning over the handsome men on the ski hill. A particular skier from Toronto caught her fancy. That was George Kent. After they had spent some time together, he got tired of her travelling Europe and eliciting twinkling eyes from foreign men, so he proposed, and they were soon married and raising two boys in a house on Rideau Rd. in Calgary, AB.

She spent time indulging in her passions, those being theatre, skiing, and tennis. My brother Doug and I were introduced to skiing as toddlers on the grand slope of the driving range at the Calgary Golf and Country Club. Through the early 60s, we skied at Happy Valley, Pigeon Mountain, and then Lake Louise. We spent weekends at Lake Louise until 1969, when we started renting a cabin at Mountview Village on Tunnel Mountain in Banff. It was there that we met a bunch of families who ultimately became the struts and pillars of the Mike Wiegele led Lake Louise Ski Club. Those families included the Reads, Harvies, Stewarts, MacMillans, Crosses and Morrisons. We spent most of the 70s skiing and racing, while all the parents were busy running the ski club and putting on races for us kids. Those were magic times for all of us and it led to that group of parents amongst many others in the Alberta ski racing scene to get a chance to run a World Cup Downhill at Lake Louise in 1980, which ultimately led to Calgary being awarded the 1988 Winter Olympics. George and Betty were in the middle of that whole process along with many other skiing enthusiasts from across Alberta and Canada whom all truly cherished the experience.

Betty bought the Canmore cottage in the early 80s and that would be her happy place for most of the rest of her life. She exercised her new passion for antiques and decorated that cottage with those trinkets and artwork. As Doug and I grew older, Betty enjoyed her own ski racing career along with George, masters racing around Western Canada. When George died in 1994, Betty was heartbroken and traumatized, but she quickly reorganized her thoughts and soldiered forward with her passions. She spent a few years on the dating scene, which was inauspicious at best. In 1998 an old friend, Bob Hutcheson, lost his wife Jane to cancer and it wasn’t long before they got together and spent fifteen wonderful years together skiing, travelling, and truly enjoying life. Betty and Bob decided to part ways in 2012 as she wanted to spend more time in Canmore and he in Huntsville, ON. She spent many happy times there for the next several years even though she had become disabled from a Spinal Stenosis operation. In Canmore Harry Mahood was instrumental in setting up her cottage so she could function efficiently, and a team of caregivers, friends and companions would spend time caring for her and driving her to her favourite spots in Southern Alberta. She lived her final years in the care of Origin in Canmore, Canmore Hospital, Care West Garrison Green, and finally back to her beloved Canmore at the Golden Eagle Care Centre, with a grand view of the mountainscape from Rundle to Three Sisters.

It takes a village to raise a child, but it also takes a village to care for and honour an elder. The Kent family thanks each and every friend and caregiver who brought Betty to her final resting place. Betty lived a full and passionate life, bringing sunshine into every room she entered. She was predeceased by her brother Stanley as an infant, her parents Lily and Fred Lepper, her sister Ileene Moore (Jack) and her husband George Kent. She leaves to cherish her memories sons, Doug and Chris (Astrid); nieces, Maureen Moore (David) and Kathryn Moore (Brad); and nephew, Michael Moore (Kathy) and their children. Betty will be missed by many.

A Celebration of Betty Kent’s Life will be held at Cross Zee Ranch (2500 Palliser Trail, Canmore, AB) on Saturday, October 1, 2022, at 4:00 p.m. Condolences, memories, and photos can also be shared and viewed here.

In living memory of Betty Kent, a tree will be planted in the Ann & Sandy Cross Conservation Area.

Share Your Memory of
Frances 'Betty'
Upload Your Memory View All Memories
Be the first to upload a memory!
Share A Memory
Send Flowers