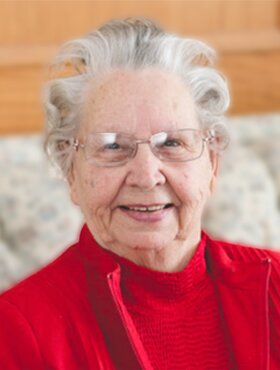 Betty was born in Englehart, ON, on February 3, 1926. She spent most of her life prior to her marriage to Roy Lee, in the district of Muskoka, near Huntsville, ON. Roy was in the army, stationed near Huntsville. They met at a dance, and three months later were married. The war ended, and off they went to the Lee farm in Saskatchewan.

Betty was a young woman (still a teenager) at the time and went from the lakes and forests of Muskoka to the endless Saskatchewan prairie to start her married life. The dugout and a row of poplar trees were a reminder of home.

Betty learned to do all the things that farm wives did in that era. Endless gardening with little water, laundering clothes with a gas wringer washer, lines full of clothes that had to be ironed, butchering chickens, milking cows, driving the farm truck, sewing clothes on the singer treadle machine, and cooking three square meals a day, always with dessert! Keeping the breadbox full of homemade bread was a constant challenge. In her recreational time, she was knitting, crocheting, and patchwork quilting. Providing a welcoming table for drop-in friends and neighbours was a common occurrence, as well as beds for sleeping over. Reading material was always at hand.

Children were Betty’s passion. The rocking chair was a necessity, spending hours with a baby or toddler in her arms or on her knee. Eight children were just the start of the clan. Betty and Roy became foster parents to over 30 children of varying ages and special needs, over a period of 20 years. This was a most rewarding, but very challenging time for the family. Fostering started on the farm in Saskatchewan and migrated to Calgary where Betty and Roy began spending the time between harvest and spring seeding. There were many trips back and forth, with Betty driving alone with a carload of kids and always a baby in the cuddle seat (no belted child carriers back then). Cooking, laundry, and cleaning still had to be done in both places. After the children were all launched, a few years were spent living between Calgary, Eatonia, and Westbank, B.C. They did not appreciate the dull winter weather in B.C., so returned to live predominately in Eatonia.

Betty spent many hours doing ceramics, playing canasta with friends, and looking after her grandchildren. Camping was one of her favorite things to do, usually with a grandchild or two in tow.

50 years of married life came to a close when Roy passed in 1995. The arrival of two great-grandchildren helped fill the time, with the rocking chair once again in constant use.

In the year 2000, Betty and Oscar Asaph started 22 years of married life. Family friends for many years, both with roots in Ontario, made for a great partnership. There were many car trips to see family in Ontario, and much to the family’s surprise, Betty took to enjoying trips to the casinos, both locally and on bus trips to the U.S.

Once again, she had a clothesline to hang laundry, and a wonderful garden full of flowers, birds, and squirrels. There were new grandchildren to rock, and another family to enjoy her baking. Her last batch of buns made from scratch was on her 90th birthday. Her life was long, full of both joy and sorrow, and oh so interesting. Oscar was the center of her later life, the most caring, hard-working, supportive husband she could have dreamed. We should all be so lucky to have an Oscar in our lives. They shared so many laughs and good times. A special thank you to the Asaph family for welcoming and supporting her, particularly in the last few years when her activities became more limited.

Betty was a strong, independent woman, a do-it-your-selfer, always ready for new adventures and challenges. She was kind, forgiving, and supportive to so many.

The family would like to thank Betty for the life she gave us and the moral compass we won't forget. Please have a dish of ice cream (or even just dig into the bucket), and maybe some homemade apple pie in remembrance of her.

Her family circle has many rings:

Betty was predeceased by her husband of 50 years, Roy Lee (1995), infant son George Garfield Lee (1948), and Kenneth Brooks Lee (1955), all of Eatonia, SK. She was also predeceased by her parents Lucy (nee Grace) and Guilford Brooks of Huntsville, ON, and younger sister Genevive (June) McCallum of Englehart, ON.

Family gatherings will be held at a later date in Calgary and Eatonia. Interment will take place in Eatonia.

Share Your Memory of
Beatrice
Upload Your Memory View All Memories
Be the first to upload a memory!
Share A Memory
Send Flowers