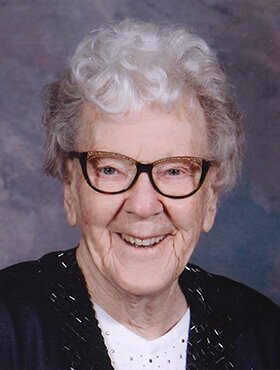 We lost a kind and loving mother, grandmother, great-grandmother and friend to many when Viola Glidden (Vi) passed away on August 25, 2022.

Vi was born in Edmonton to Marie and John Roxburgh, where she grew up in the McCauley neighborhood. Growing up, Vi was involved in the United Church, where she made many lifelong friends in the young peoples group and where Vi met Harold Glidden.  Harold worked for Alberta Municipal Affairs in Spirit River, so they settled there after getting married in 1956.  While in Spirit River, they had three children: Earl, Barry and Jane. In 1970, Harold transferred to Calgary and the family moved to the North Haven neighborhood, where they were active at Pleasant Heights United and then St. David’s United Church.   Vi sang alto in the choir and enjoyed visiting with her church friends each week. Harold and Vi were involved in square dancing and were members of Skrastins Outdoor club, where they skied and hiked in the mountains they loved. Vi’s adventurous spirit led her to travel all over the world, and she was also on the board of William Watson Lodge.  Vi was a fun-loving mother and grandmother who was willing to go for an ice cream, do crafts and play games. She will be warmly remembered by her children, Earl (Wendy), Barry, Jane; her two grandsons, Shea and Dylan; and great-grandchildren, Ava and James. Viola was predeceased by her parents, her husband Harold, and all her brothers and sisters.

The family would like to thank Brentwood Care Centre and her special companion Colleen for the care she received during the past few years. If friends so desire, memorial tributes in Vi’s name may be made directly to the William Watson Lodge Society, Box 30344, Chinook Postal Outlet, 6455 MacLeod Trail South, Calgary, Alberta, T2H 2W1.

A Memorial Service will be held at St. David's United Church, 3303 Capitol Hill Crescent NW, Calgary, AB, on Saturday, October 15, 2022 at 2:00 p.m. Reception to follow at the Church. Condolences, memories, and photos may be shared and viewed here.

Share Your Memory of
Viola
Upload Your Memory View All Memories
Be the first to upload a memory!
Share A Memory