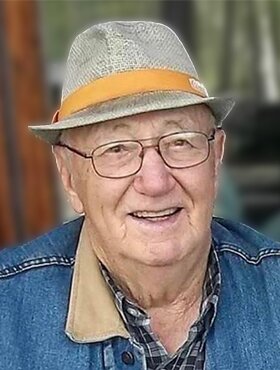 It is with heavy hearts the children announce the passing of Dad, Grandpa, Great-Grandpa; Donald (Buck) Sellers beloved husband of the late Violet Sellers of Calgary, AB, on Thursday, August 25, 2022 at the age of 90 years.

Dad was the last member of his family to pass. He was predeceased by his loving wife Violet, who passed April 2, 2022; his parents, Richard and Marie Sellers; five brothers, Len, Raymond, Bob, Ken, and Fred; brother-in-laws, Leonard and Earl Petterson, Roland Larson and Gunther Wallmuth.

Our dad was an amazing man. He was born and raised in Crescent Bay, just north of Lac du Bonnet, Manitoba, the youngest of six boys. As dad started to forge his way through life, he met our beautiful mother, whom he married March 6, 1953. They spent 69 years together, raising and providing for seven children.

Dad wore many hats throughout his lifetime, from bartender, carpenter, barber, social worker, to businessman of a second-hand store to flea marketer. He had a knack to fix what was broken or not running and either used it or made a few dollars selling things at the Hillhurst Community Flea Market in Calgary.

Dad always wanted to be his own boss, so in his early years he took a course, graduated and became Lac du Bonnet’s local barber. Buck’s Barber Shop became a magnet for everyone needing a haircut, followed by a game of cribbage, chess, and checkers or to find out local gossip. Any male living in Lac du Bonnet in the 60’s and 70’s probably walked out of the barber shop with a brush cut!  We all have memories of dad dressed in his white shirt and dress pants, cutting someone’s hair, listening to CJOB, sitting in his barber chair reading the newspaper, or playing crib while waiting for his next client in between haircuts. If there was no one around to play with him, any of us kids going to the barber shop after school would then get a lesson in cards.  He was a fantastic crib player, having his name placed in the local paper a couple times, achieving a perfect 29 hand. He never declined a game of crib and almost always came out the winner.

Since the early 60’s one of dad’s achievements in life was being involved in and a member of A.A.  His strength, courage and commitment assisted him and others to lead a healthy productive life.

Dad loved the outdoors, exploring and being in the bush. With seven mouths to feed, whatever he hunted or fished was brought home. Our mother would cook it up, be it bear, rabbit, deer, moose or beaver. He passed this love onto his sons, and showed them how to fish, hunt and also trap. Together with his brothers, Fred and Bob, and friends, John Sopatuik and Mort Bruchanski, dad joined the prospector world and scoured the Eastern part of Manitoba, looking for different minerals in rock formations.  If you showed him a different rock, he would tell you what it was and what it was made of. He had a collection of rocks and knew where they all came from. Crawling through the rocks and swamps, dad also loved picking wild rice. He built a wild rice picker and would go up to Shoe Lake in the fall to pick rice. To ensure the wild rice’s future, he flew with Mort and seeded areas around Black and Shoe Lake. With his sons, Richard and Ryon, he canoed around McArthur Falls and along the dike, seeding the shallow areas.

Dad could not skate but wanted to learn, so he joined the local senior’s hockey team in the 70’s and basically danced on his skates and leaned on his stick or the boards to keep balance.  The opposing team would sometimes pass him the puck to see what he could do. He somehow managed to score a goal, which brought cheers and laughter to the fans in the stands and again made news in the local paper.

With long hair being the style in the 70’s, dad laid down his barber tools, moved to Calgary in 1976 and, with his oldest son Richard, worked various construction jobs, building a few of the skyscrapers in downtown Calgary. After a few years, he hung up his hammer and once again became his own boss, opening up a huge second-hand store called Buck’s Bargains. He worked at this venture until he closed the store and began selling his wares at the Hillhurst Community Flea Market every Sunday until Covid hit and it couldn’t go any longer.  Dad was a firm believer that everything had value. Going for a ride with dad wasn’t to sightsee, but go down back lanes, pickup household goods, bring whatever it was home, repair it if he could and then sell it. The Flea Market was an avenue for dad to pull out his cribbage board and become the centre of attention, playing crib and ‘telling lies’ with many friends and acquaintances he made over the years.

Both mom and dad loved their hometown Lac du Bonnet, and they made countless trips each summer to visit with family and friends.  He was a great storyteller, and sitting around a fire he would tell scary tales of what he saw or heard in the bush or about flying saucers.  Dad loved his grandchildren and great-grandchildren, always making sure they all felt special, and taking interest in their lives and what they did.  He loved them dearly and was very proud of them all.

Dad had many quotes, he always ended the conversation with ‘Right on,’ ‘Pip Pip,’ or ‘don’t fry bacon with your shirt off.’

Cremation has taken place, and in accordance with dad’s wishes, there will be no formal service. Condolences, memories, and photos can be shared and viewed here.

If friends so desire, tributes in Donald’s memory may be made directly to the Lac du Bonnet, Lakeshore Group Alcoholics Anonymous, PO Box 1212   Winnipeg, Manitoba, https://aamanitoba.org/self-support.

Share Your Memory of
Donald
Upload Your Memory View All Memories
Be the first to upload a memory!
Share A Memory