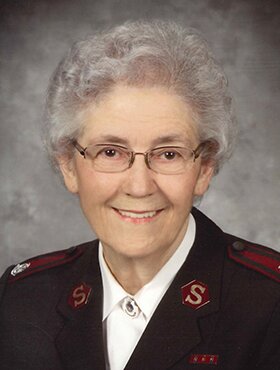 Barbara Anne McDowell Heintzman, beloved wife of the late Fredrick Heintzman of Calgary, AB, passed away on August 26, 2022, at the age of 87 years.

Barbara was born in Edmonton, AB on April 27, 1935, to loving parents Samuel and Beatrice Callen.  Barbara grew up attending the Salvation Army and decided at a young age to commit her life to full-time service to God.  She was commissioned as a Salvation Army Officer in 1957.  Barbara married Fredrick Heintzman on July 7, 1960 and began their life together serving as Salvation Army officers in Saskatchewan, British Columbia, Ontario, and Alberta.

Barbara loved music and encouraged her children to learn the piano and brass instruments.  The Heintzman house was always full of music, from first thing in the morning when piano practice began until late into the evening, with Barb humming along to whatever was being played.  Starting as a teenager, Barb enjoyed playing in the band and singing in the choir at the various corps she attended.  Barbara also loved the mountains which led her to retire with Fred in Calgary so they could enjoy the Rocky Mountains; they often would drive to Banff or Kananaskis to enjoy God's creation together.  Barbara also loved her family and was blessed with five children.  She enjoyed spending time with her twelve grandchildren and four great-grandchildren, reading with them, playing board games, and teaching them to bake.

Barbara is survived by her three daughters and two sons-in-law, Carolyn and Brian Benoit of Wetaskiwin, Anita Richard of Calgary, and Kathryn and Jeff Haskey of Calgary; two sons and one daughter-in-law, Bradley and Barbara Heintzman of Edmonton, and Ronald Heintzman of Hamilton; twelve grandchildren, Matthew Richard, Rachel (Jordan) Miller, Alannah (Jesse) Landgraf, Jillian, Noah, and Isabella Haskey, all of Calgary, Samuel and Anna Heintzman, of Edmonton, Brookelyn (Kyle) Millar, Rabekah (Jake) Wiseman, Curtis and Sydney Heintzman, all of Hamilton; as well as her four great-grandchildren, Gloria and Russell Miller, Aiden Millar and Theo Landgraf. Barbara is also survived by her sister and brother-in-law Beatrice (Trixie) and Ron Wicks of Edmonton and her sister-in-law Ellen Callen of Oregon, as well as many nieces, nephews, cousins, and friends.

Barb was predeceased by her parents Samuel and Beatrice Callen, her brother George Callen, her granddaughter Julia Haskey, and her beloved husband Fred.

The Celebration of Barb’s Life will be held at The Salvation Army Glenmore Temple (921 - 68th Ave SW, Calgary, AB) on Friday, September 9, 2022, at 2:00 p.m. Reception to follow. Family and friends who are unable to attend in person are invited to join Barb’s service streamed live on the day of the service on The Salvation Army, Glenmore Temple -Facebook, or YouTube page.  A graveside service will be held on Tuesday, September 13, 2022, at 2:00 p.m. at Glenwood Memorial Gardens, Edmonton. Reception to follow. Condolences, memories, and photos can also be shared and viewed here.