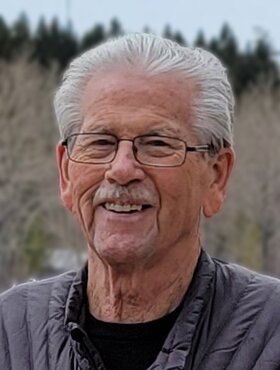 The youngest of ten children, Norm was born in Canora, Saskatchewan on June 8, 1934, and at age 11, moved to Calgary with his parents.  There, they built the family home in the 1940’s which Norm has kept in the family to this day. After graduating from the drafting program at SAIT, Norm worked as a draftsman for Mobil Oil for 34 years before retiring in 1989.

Norm married his wife of 65 years, Lorna Ager in 1957.  Besides his loving wife, Norm is survived by his daughters Charlyn Llewellyn (Wayne) of Penticton, BC, Tanis Kepper (Dieter) of Hinton, AB; his son Trent Johnson (Sheri Donegan) of Kamloops, BC, and daughter-in-law Corinne Johnson of New Market, ON.  He is also survived by eight grandchildren, Christopher and Matthew Llewellyn, Tanner, Madyson, and Leighton Johnson, Kurt Ireland, Ryen and Lauren Mark; as well as four great-grandchildren, Jack and Grace Llewellyn, Charlie Llewellyn and Ella Ireland; and special family member Desiree Raposo.  Norm is also survived by his sister, Irma McKinstry of Weyburn, SK, as well as numerous nieces, nephews, cousins, and friends. Norm was predeceased by his son Tyler Douglas Johnson, his parents John Milton Johnson and Margaret May Johnson; as well as eight siblings.

Norm, dad, Grandpa, and GG-pa will be lovingly remembered and dearly missed by everyone who knew him.  His love of a good practical joke at the campground, his perfectly manicured lawn, his laser-straight Christmas lights, his over-the-top generosity, his love of the Calgary Flames and Stampeders, his sage financial advice, his organizational skills, his love of travel adventures, and so much more can never be replaced. Above all, his relentless winning at Cribbage and his selfless devotion to his family were possibly his most memorable and remarkable traits.

The family would like to thank Dr. Nimira Alimohamed and nurse Tevi, all the staff at the Tom Baker Cancer Center, Carewest Glenmore, and the Chinook Hospice for your dedication to making Norm’s life a little brighter, a little more comfortable, and giving him the dignity that he deserved.

Funeral Services will be held at McInnis & Holloway (Chapel of the Bells, 2720 Centre Street N, Calgary, AB) on Friday, September 2, 2022, at 2:00 p.m. Family and friends who are unable to attend in person are invited to join Mr. Johnson’s service streamed live on the day of the service (see below). For those who are unable to view live, a recording of the service will be posted. Graveside Service to follow at Queen's Park Cemetery. Reception to follow in the Hospitality Centre at the Funeral Home. Condolences, memories, and photos may be shared and viewed here.

Share Your Memory of
Norman
Upload Your Memory View All Memories
Be the first to upload a memory!
Share A Memory