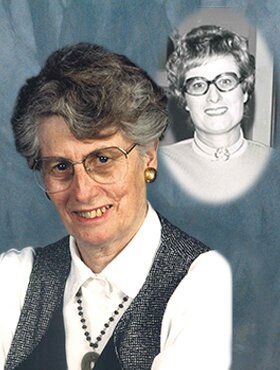 Dorothy was born in Vancouver, B.C., on September 25, 1927. Her family moved to a farm near Acme, AB, shortly afterward and it was during her youth here that she would often have the joy of riding her horse to school. She moved to Calgary, AB, to attend Normal School.

Dorothy graduated from the University of Alberta with a Bachelor of Education and went on to teach elementary school at a number of locations in Alberta, including Acme and Strathmore, as well as Renfrew Educational Services in Calgary. Dorothy married Mark Podgurny in 1959 and enjoyed learning to play golf with her husband as a young wife. In years to follow, she enjoyed being a homemaker and mother, and later in life, she loved receiving photos and phone calls from her grandchildren, Nathan, and Natasha.

Dorothy was a member of the Parkdale United Church. She was also a cherished member of their choir for forty years. Dorothy had a fine soprano voice and sang at many weddings. She accomplished much through her life and was particularly proud of her attendance in the vocal program at the Banff School of Fine Arts one summer. Dorothy also loved books, so much so, that even when she lost her eyesight to macular degeneration, she listened to books on her daisy reader, or had her daughter Lynn read to her. She also enjoyed sewing, knitting, and cooking, answering calls from her children asking cooking questions many times over the years.

Dorothy’s most memorable vacation was when she won a trip to Jamaica from Woolworths Supermarket in the 1970s. That was quite a trip to Montego Bay.

Funeral Services will be held at McInnis & Holloway (Chapel of The Bells, 2720 Centre Street North, Calgary, AB), on Thursday, September 8, 2022, at 11:00 a.m. Reception to follow in the Hospitality Centre at the Funeral Home. Condolences, memories, and photos may be shared and viewed here.