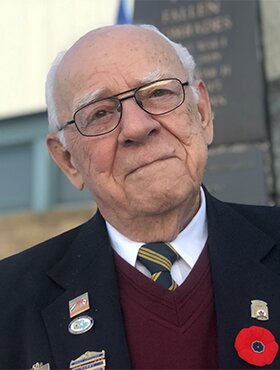 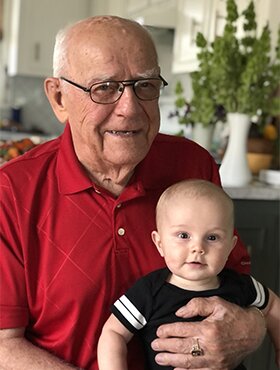 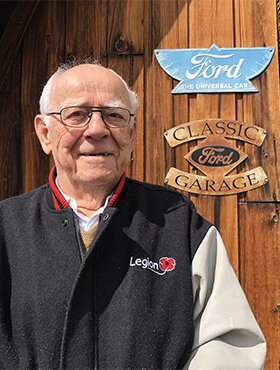 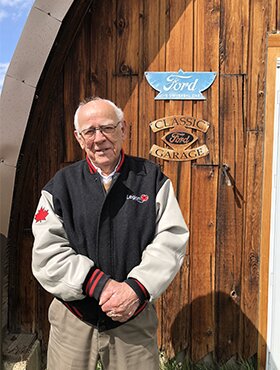 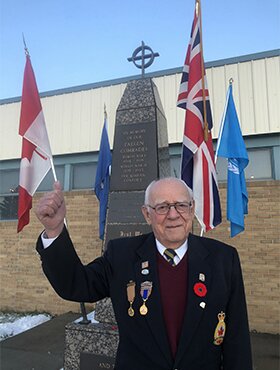 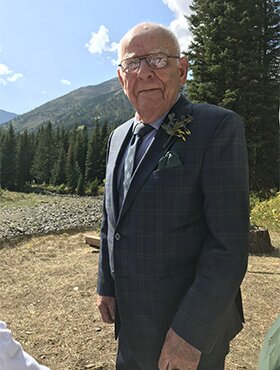 With heavy hearts, we announce that George Edward Kerby (Poppi) of Calgary, AB, took his last nap on Wednesday, August 31, 2022. George lived to the ripe old age of 95, he was a solid napper, so we checked twice before posting his obituary.

The world was a lot sweeter when George was born to Alfred James Kerby and Eva Frances Goodall on May 7, 1927, in Calgary, AB. A rambunctious lad, he left school, those "fools", and their books, and started working in manual labour at a young age. He felt the call to fight for his country during WWII and enlisted as soon as possible. He was particularly proud to be a member of The Royal Canadian Legion for over 60 years. Eventually, George had the good sense to find the love of his life, Josephine Krisa, and schooled a couple of those "fools" at billiards for the down payment of their house and her engagement ring. Good fortune smiled upon the newlyweds, and they had three daughters, Leslie Kerby, Nancy Jo Kerby, and Tracy Seabrook (nee Kerby, married to Keith Seabrook).

George was a driver, and later a dispatcher, for United Cabs in Calgary, which may explain his flair for profanity while navigating the roadways. After a guy at a bar told George to apply for the City of Calgary Sewer Department, he wisely transferred to Transportation, specializing in detours for a quarter century. George enjoyed blocking off areas of downtown Calgary during the 70s and 80s for motion picture filming. Another quarter-century achievement of his was volunteering with the Calgary Exhibition and Stampede, assisting at Fort Calgary on Parade Day. He loved making people take the long way around.

Never one to let anyone win, he properly schooled his grandchildren, Javan K. Bernakevitch (and his partner Todd Merrell), Aaron Bernakevitch (and his wife Deitra Kalyn), Spencer Seabrook (and his husband Jeffery Seabrook), Mackenzie Seabrook, and good family friend Mona Leung, in cribbage, reminding everyone that “some call it luck, others call it skill, but the loser still deals”. He looked forward to passing these same lessons on to his great-grandsons, Alister George Bernakevitch, and Luca Kai Bernakevitch. Still, he knew he hardened the last batch of Kerby's, ensuring his tutelage endured.

George spurned anything from the sea, affectionately referring to the ocean as "the world's largest garbage dump". You're welcome for all the fish he left you to eat. Thrilled to be collecting his pension longer than he "ought to be," he thanked everyone he met for continuing to pay their taxes.

Later in life, he became a lover of garage sales, and no one was spared from his thoughtful nature and that twinkle in his eye when he said, "oh, I'm glad you're here. I found something for you.", only to receive a one-of-a-kind treasure, wanted or not. George also single-handedly increased the profitability of Werther's Originals candies. No woman could pass his presence without conjuring that familiar twinkle and proposition, "I've got a little something for you.", only to find themselves with butterscotch candy, wanted or not. You just didn't say no to George's gifts.

Sadly, the love of his life, Jo, passed in 2004; they were married for 57 years. No doubt Jo is taking a strip out of him for "taking so long" but warmly welcoming him all the same. George was a generous, gentle, humble, kind, and greatly loved man. He will be sorely missed by his family and friends who thought the world of him.

At his request, there is no funeral service. In his words, "why would I pay for people to drink coffee and talk about me? They can drink their coffee at home."