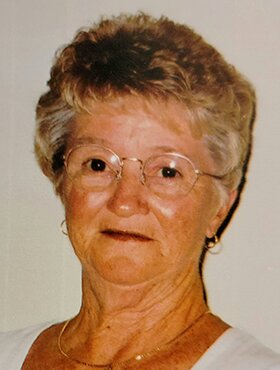 Yvonne Starling (nee Morrison), beloved wife of Kenneth Starling, passed away on Friday, September 2, 2022, at the age of 88 years.

Yvonne Starling was born in Hardisty, Alberta. She was the second born to parents James and Helen Morrison on February 4, 1934. Her siblings were Harold, Lorne, Laverne, Bryan, and Beverly. Yvonne grew up cleaning and helping around the house and in her formative years, she babysat, cleaned houses, cleaned the church, as well as the school regularly. This formed her work ethic that carried her throughout her whole life. In her early teens, she worked as an overnight telephone operator in the town of Hardisty, as well as worked in the local restaurant.

Moving to Calgary, she met James Sheridan while working as a telephone operator for AGT, and they were married in 1953. Of that union came Stephen, Jeffery, and Theresa. Yvonne’s children had great fun growing up with numerous cousins, aunts, and uncles. They also enjoyed many family vacations, camping and boating, mostly in the Okanagan.

Upon the dissolution of her marriage, Yvonne and the children relocated to the area known as Westbank, BC. The family spent about two years there before returning to Calgary, where Yvonne, Stephen, and Jeffery all started working for Safeway. Yvonne met Don Moran in 1972. This newly blended family included son Craig and daughter Teri-Lyn. Together they enjoyed many years of family life. Yvonne and Don were married in 1984. They had a wonderful relationship that included getting to know Donny’s family residing in Lethbridge, AB. Many wonderful loving relationships were made, including Melba Kjeldgaard (Don’s sister) and her husband Dennis.

Yvonne's brother and sister-in-law, Harold and Maxine, introduced them to winters in Palm Springs.  They were hooked!  In the coming years, they purchased a mobile home in Safari Park, Palm Springs. Early retirement for both ensured they would spend six months per year as snowbirds. There was always a welcoming atmosphere in Safari Park where Don and Yvonne made many friends. Den and Melba Kjeldgaard, Al and Nancy Sliger, and Carol and Roger Post were among the many friends from across Canada and the USA. It was a giant melting pot of beautiful souls, all enjoying their retirements and the wonderful atmosphere in the desert.

Yvonne continued to work for Safeway and excelled at anything she chose to do. Stephen can remember her telling him how she would be busy stocking spices or cigarettes in the Brentwood Safeway and people would come up and say, “I am ready to check out now, Yvonne”. Even though there were other cashiers on till, they enjoyed her pleasant, positive, congenial manner. These attributes helped her move up to the personnel department in Safeway’s head office in Calgary. Yvonne cemented many long, wonderful friendships while working there; you all know who you are.

Yvonne faced many tragedies in her life, with a strong faith in God; she resolved to carry on. First Craig, Donny’s son, died, and then three months later, Don died of a broken heart.

Yvonne was determined to continue to winter in Palm Springs, and in 2002, a mutual friend, Roger Post, introduced Kenneth Starling to Yvonne. They were smitten!

After a whirlwind courtship, they married on January 23, 2002. They continued to enjoy Palm Springs in the winter and Canyon, BC, in the summers. While in the desert together, they excelled at shuffleboard, taking home many trophies over the years. They also enjoyed hiking, dancing, and socializing with the 20/20 group weekly at the clubhouse. They welcomed many relatives that bought or rented in Safari Park each winter, including Rita and Mike Murtha, Darrel and Gayle Murtha, Beverly Conzevoy, Maxine Morrison, Bryan Morrison, Den and Kathy Kjeldgaard, all of who lived very close by. It was a great getaway in the winter for all their kids, who quite often would bunk in or rent nearby during their yearly holidays. Yvonne was a going concern all through her life; she had an energy that was endless, she exhibited a love for life that was incredible, and with Ken, who was very similar in character. One memory Stephen would love to share is on her 80th birthday cruise in the Caribbean, Ken and Yvonne cleared the floor in a big band nightclub and held the attention of the nightclub for more than thirty minutes, at 80 and 78 years of age!

Yvonne showed her resilience again facing her son's battle with cancer. Together with Jeff’s loving wife Lucy, Ken and Yvonne spent much time being with them both in Vallejo, California, offering any support they could. She was also there for Stephen and Jacquie when he got a liver transplant in Edmonton. While at the same time, her daughter Theresa suffered a heart attack in Kelowna. She bravely survived both her children, Jeffery, and Theresa, though finally succumbing to dementia, after a long and strong battle with that disease. Her loving husband Ken and his entire family in Cranbrook provided absolutely the best support she could have.

A Celebration of Yvonne’s Life will be held at McInnis & Holloway (Crowfoot, 82 Crowfoot Circle NW, Calgary, AB), on Sunday, September 18, 2022, at 2:00 p.m. Reception to follow in the Hospitality Centre at the Funeral Home. Condolences, memories, and photos can also be shared and viewed here. If friends so desire, memorial tributes may be made to the charity of your choosing.

Share Your Memory of
Yvonne
Upload Your Memory View All Memories
Be the first to upload a memory!
Share A Memory