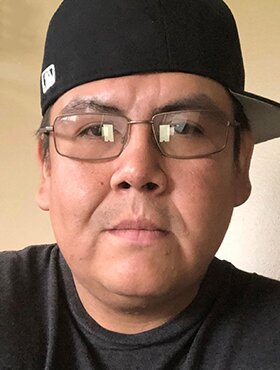 It is with great sadness that the family of Michael Andrew Breaker announces his sudden passing at Siksika Nation on Friday, September 2, 2022 at the age of 33 years.

Michael resided on the Siksika Nation and was born April 6, 1989, in Strathmore, AB. His family and friends knew him to be humble, kind-hearted, friendly, and respectful to all. Michael attended Strathmore Schools, SAIT and received his High School Diploma at the Old Sun Community College. After graduation, Michael was employed at the Siksika Public Works, a position he held with great accomplishment and pride. Michael’s favourite teams were the Calgary Flames and Stampeders proudly displaying the team jerseys and hat collections. Michael enjoyed his time with family and his many friends; he will be lovingly remembered.

Michael is survived by his parents, Edith and Edwin; his siblings, William, Martin and Leeanna; and his special nieces, Felicia, Jeri and Autumn. He also had great love for his older sister/cousin, Tanya Eagle Tail, and her sons he took as nephews, Tyreese and Eisley. He is also survived by his uncles, Stanley (Norvena) Breaker and Durwin Many Heads; special cousins, Brent, Brett, Brittney and Lillian; and his godparents, Cherie Spotted Eagle and Warren Spotted Eagle. Michael leaves behind his families and relatives, Spotted Eagle, Many Heads, Breakers, Bear Chiefs, Stimsons, Smith, Crowfoots, Many Shots, Stud Horses, Blacks, Little Lights, Royals, Running Rabbits, Low Horns, and Wolf Childs. The family apologizes for anyone missed.

6:00 pm - 12:00 am
Gordon Yellowfly Memorial Arbour
Siksika Nation
Siksika Nation, Alberta, Canada
Wake Services will be held at the Siksika Piiksapi Memorial Arbour, Family will be having a private Wake at 2:00 p.m. and it will be open to the public for 6:00 p.m. until 12:00 a.m.
Need Directions?
View Map | Text Directions | Email Directions
Monday
12
September