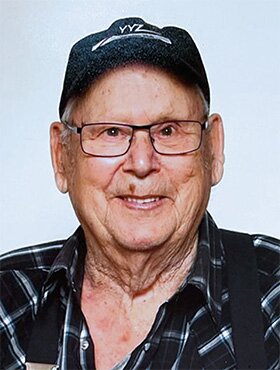 Norris Henderson, beloved husband, father, grandfather and great-grandfather passed away on Monday, September 5, 2022 at the age of 94 years.

Norris was born in Lethbridge, AB and grew up on a farm/homestead near Archerwill, SK. In 1956 he began working for Alberta Wheat Pool building elevators throughout Alberta, where he worked for 35 years until he retired.  Norris and Vickie were married July 8, 1967, they moved 2-3 times a year with his work until they settled in Beiseker, AB  in September 1972.  Norris enjoyed travelling, playing cards, fishing, camping/RVing, and being a member of Beiseker Golden Years Town and Country Club.  Norris & Vickie's most memorable trip was an 18-day coach tour around the western United States. Norris loved spending time with family and had a unique sense of humour.

Funeral Services will be held at McInnis & Holloway (Airdrie, 300 Towerlane Drive) on Wednesday, September 14, 2022 at 2:00 p.m. Reception to follow in the Hospitality Centre at the Funeral Home. Family and friends who are unable to attend in person are invited to join Mr Henderson's service streamed live (see below) on the day of the service. For those who are unable to view live, a recording of the service will be posted. Condolences, memories and photos may be shared and viewed here.

Share Your Memory of
Norris
Upload Your Memory View All Memories
Be the first to upload a memory!
Share A Memory
Send Flowers