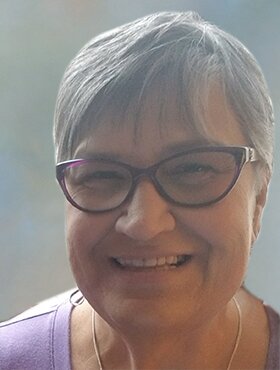 Lucie Goodheart of Calgary, AB, passed away on Tuesday, September 6, 2022 at the age of 62 years.

Lucie was born in Moncton, New Brunswick on August 19, 1960 to Camille and Lilliane Poirier. A short part of her childhood was spent down in Waltham, Massachusetts where Lucie had many fond memories and stories that she liked to talk about. She then moved out to Alberta in the late seventies with her brother Paul, were she eventually met Keith Goodheart of Coronation, AB. They got married December 10, 1983 on a very cold -35 day in Coronation, AB. They have been happily married for 39 years.

Lucie accomplished much through her life, she really enjoyed meeting new people everyday while she worked for the local Brooks newspaper and then later at the Brooks Health Foundation. She was particularly proud of watching her two kids grow up and seeing what they have accomplished in life. Then in the most recent years watching her two granddaughters grow up. Lucie and Keith enjoyed many weekends at Lake Newell in Brooks with family and friends, where plenty of laughs and memories were had. She also enjoyed her many visits back to New Brunswick and Massachusetts to visit old friends and families and have a lobster or two.

Besides her loving husband Keith, Lucie is survived by her son, Tyler (Jill) Goodheart of British Columbia and their children, Harper and Olive; and her daughter, Kayla (Rick) Quantz of Alberta. Lucie is also survived by her mother, Lilliane Poirier of New Brunswick; brother, Paul (Brenda) Poirier of Florida; and her sister, Denise Poirier of Florida; as well as numerous cousins, and friends from far and wide. She was predeceased in death by her father Camille Poirier.

In keeping with Lucie’s wishes, she has chosen to have a private family viewing. Condolences, memories, and photos can also be shared and viewed here.

Share Your Memory of
Lucie
Upload Your Memory View All Memories
Be the first to upload a memory!
Share A Memory
Send Flowers