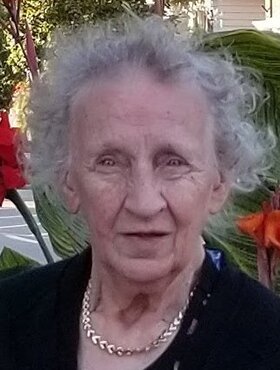 Phyllis Thomson, beloved mother and grandmother passed away on Wednesday, September 7, 2022 at the age of 94 years.

She is survived by three children, Sheila (Gary), Jim (Margot) and Steve (Tara) and six grandchildren, Chris (Marlena), Stephanie (Darcy), and Erik Hanson (Lauralee) and Caitlin (Brett), Josh and Nick Thomson, all of Calgary. Phyllis is also survived by her brother Fred Roberts of Vancouver, B.C. and sister Gladys Cox of Meaford, ON. Phyllis was predeceased by her husband of 59 years, David Thomson in 2016, her three half-siblings, Leslie, Winnie, and Elsie and her parents, James and Minnie Roberts.

Phyllis was born in Lemberg, SK and grew up in Regina. After working for three years, Phyllis saved enough to go to McMaster University in Hamilton where she attended two years in the Divinity program. After completing University, Phyllis moved to Calgary to work as church secretary for First Baptist Church. It was there, she met her husband David and many lifelong friends.  Phyllis and David were married at Altadore Baptist Church on August 25, 1956.

Phyllis was a loving and involved mother, staying home for several years, spending her time volunteering in her children’s schools and within the community. In later years, Phyllis returned to the work force, working as a legal secretary for many years with R. Webb Environmental.

Phyllis had a passion for gardening and always made the comment in early spring that she had itchy fingers to get planting her vegetable garden and perennials. Phyllis was never afraid to try anything new. She became an active golfer and bowler later in life, golfing weekly with her husband, Dave, with the Retired Teachers Golf Club at Lakeview Golf course. Phyllis and Dave also bowled weekly at Mountain View Bowling Alley. After Dave’s passing, Phyllis continued both activities for many more years.

Phyllis’s most memorable vacations included a trip to Hawaii for her and Dave’s 25th wedding anniversary and an Alaskan cruise in 2008.   She will be most remembered for her role as the pillar of the family providing stability, wisdom, and quiet but tremendous love, enjoying a coffee (and brownie) with a family member or friend, hosting family Sunday dinners, and over taping Christmas and birthday gifts.

A Funeral Service will be held at McInnis & Holloway (Park Memorial, 5008 Elbow Drive SW, Calgary, AB) on Thursday, September 15, 2022 at 2:30 p.m. Reception to follow in the Hospitality Centre at the Funeral Home. Condolences, memories, and photos can also be shared and viewed here.

Share Your Memory of
Phyllis
Upload Your Memory View All Memories
Be the first to upload a memory!
Share A Memory