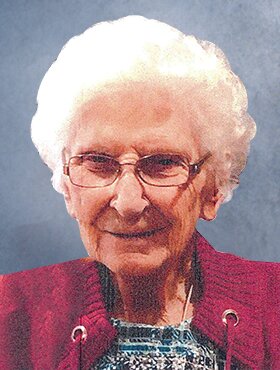 Molly was born on a farm outside Leader, SK on April 7, 1924. She was the second youngest of ten children and grew up helping on the farm.

She moved to Medicine Hat, AB to further her education at Garbutt Business College where she graduated as a stenographer. Her first job was as a secretary at the Taber Sugar Factory. There she met William (Bill) Hedley, and they were married on June 28, 1952. Upon marrying Bill, she gained her first daughter Frances, followed by Pat, Deb and Sheila. She continued to be a homemaker plus working full time at the sugar factory until she retired at age 55.

She was a member of the Taber United Church of Canada where she sang in the choir. She also volunteered at Parkside Manor as Treasurer.

Molly enjoyed golfing, sewing, and baking. She especially enjoyed trailering with family and friends. Her most memorable vacation was an Alaskan Cruise with Bill and her daughter Pat.

Molly was the last surviving member of her generation of family and is survived by numerous, nieces, nephews, and friends.

Molly was predeceased by her husband of 62 years William (Bill) Hedley.

A Funeral Service will be held at McInnis & Holloway (Park Memorial, 5008 Elbow Drive SW, Calgary, AB) on Thursday, September 15, 2022 at 1:00 p.m. Reception to follow in the Hospitality Centre at the Funeral Home. Condolences, memories, and photos can also be shared and viewed here.

If friends so desire, memorial tributes may be made directly to the Alberta Children’s Hospital Foundation, 28 Oki Drive NW, Calgary, AB T3B 6A8, Telephone: (403) 955.8818. www.childrenshospital.ab.ca

Share Your Memory of
Molly
Upload Your Memory View All Memories
Be the first to upload a memory!
Share A Memory