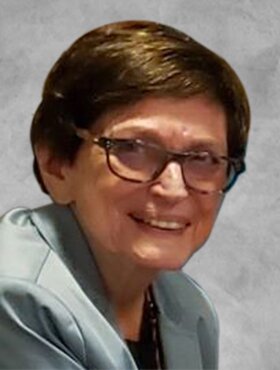 Aileen was born in Champion, AB, on March 16, 1932. She grew up on a farm near the town. Aileen attended all levels of school in Champion. In high school she took up curling. She made the school team and travelled around her region representing her school. After graduating from high school, she moved to Calgary, AB, where she went to business school, then worked for Excelsior Insurance, Union Oil, and Neon Sales & Service, where she met Nelson MacDonald. They were married in 1961. After a few years they struck out on their own and formed their own company Nelson MacDonald Design. They were a great team. Nelson was sought after as an architectural designer while she handled the business duties. She also created sample boards for presentations to clients. They did work for hotel chains, the City of Calgary, and the Calgary Flames to name a few. Their company continued for over 40 years. While they travelled extensively for business, they didn’t do too much travel for fun. They enjoyed their condo in the Coal Harbour area of Vancouver, BC. and travelled there as often as they could.

Aileen is survived by her nephew Larry Krasman of Calgary, AB; her cousin Donald Beaubier of St. John’s, NL; her sisters-in-law, Margaret-Jean Samuelson (nee MacDonald) and Kathy MacDonald both of Calgary, AB; as well as numerous nieces, nephews, cousins, and friends.

Share Your Memory of
Aileen
Upload Your Memory View All Memories
Be the first to upload a memory!
Share A Memory
Send Flowers