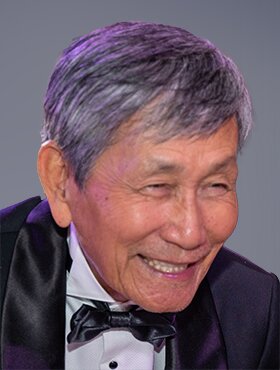 Born in Can Tho, Vietnam, Linh spent time in Cambodia and Laos with his family, before they settled in Saigon. Born during a time of war, Linh served in the South Vietnam Navy, fighting alongside the Americans during the Vietnam War.

He fled his homeland after the fall of Saigon, spending time in a refugee camp in Manila, before leaving for California. He eventually immigrated to Canada in 1975, where he became the first Vietnamese refugee in Regina, Saskatchewan. He proudly called Canada his home for the remainder of his life.

He soon met and fell in love with Maria Cristina S. Torres, and they married at Parish of the Christ King in 1976. They headed west towards the economic boom of Calgary, Alberta, where they raised two daughters, Crislyne and Sherisse. He worked hard providing for his family, but still made time to support his daughters’ budding interests like music and ice skating.

Linh loved cars. He was an auto mechanic for many years and enjoyed tinkering with and driving muscle cars. He admired Japanese engineering, and favoured Toyotas and Hondas as reliable vehicles.

He had a passion for news and current events, CNN being his favourite channel. He was incredibly proud when his youngest daughter, Sherisse, joined CNN as a reporter, and would even write down the times he saw her on TV.

He was a joyful grandpa who unapologetically spoiled his only granddaughter, Chanel LeRoux, and was an integral part of raising her. In his later years, he took on an added role of great-grandfather to Nico, Chanel’s pup.

He will be dearly remembered as a happy-go-lucky man, proudly taking care of himself and his wife. Linh lived life to the fullest. He will always be loved.

Share Your Memory of
Linh
Upload Your Memory View All Memories
Be the first to upload a memory!
Share A Memory
Send Flowers