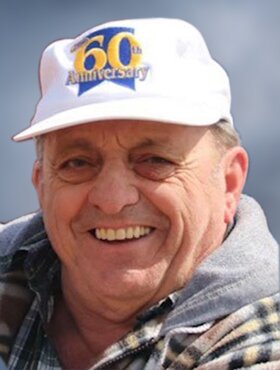 Bob Cassista, beloved husband of Faye Cassista of Calgary, AB., passed away on Sunday, September 11, 2022 after a courageous battle with cancer, at the age of 77 years.

Bob was born in St Jacques, NB on December 17, 1944. He moved to Montreal where he worked, for a number of years in the baking industry, which he enjoyed.  The beauty of the West Coast, with the mountains, ocean and lakes, drew him to move to Vancouver, BC in the late 60’s.  He enjoyed the outdoors delivering mail for Canada Post but felt he would prefer it a bit drier underfoot and the challenge of deadlines while driving public transit would also fill his need for people contact.

While working for BC Hydro, Bob met Faye, who became the love of his life, and they married in North Vancouver in 1976.  After purchasing their first home in Pitt Meadows in the scenic Fraser Valley a transfer to Calgary prompted the purchase of their current home in Canyon Meadows, where Bob started his career in Real Estate, which being the people person he was, was one of his best moves.

He enjoyed going out for breakfast especially with his neighbourhood buddies and other close friends, helping his neighbours, loved building his train village, playing pool, fishing, cooking up a storm in the kitchen and chatting, laughing with neighbours, friends, and family.

Bob loved to drive, visiting family and friends out of town, and a trip to Maui was a experience never forgotten.  He also loved fishing, when living in BC.

Bob developed and maintained a very special relationship with his nephew Lenny until the very end.  When going on family trips to the States or during summer holidays Bob was always happy to have Lenny join us so he was not outnumbered with the females!  The closeness between these two continued when Lenny asked Bob to be his best man at his wedding and was honoured to have their reception at our home. A very special friendship that meant so much.

He also developed strong friendships with his in-laws, and their neighbours in their towns, by his friendly easygoing manner, kindness, and enjoyment of life. Tom Holloway was also a treasured friend of Bob’s.  The two liked to share stories about the olden days and Bob enjoyed taking him to places that Tom knew and liked to tell Bob stories about.  Bob liked to listen and learn from people such as Tom. One more special friend was Terry Campbell.  They spent hours chatting about everything that came to mind which Bob found very relaxing and fun over the years.

Besides his loving wife, Bob was survived by his daughter and son-in-law Nancy and Adam; and granddaughters, Emily and Elizabeth whom he loved dearly.

Bob is also survived by one very special sister Mado, who lives in Quebec City, QC. whose frequent phone calls were always an uplifting session for Bob, also nephews, cousins, and friends throughout Canada.

Bob was predeceased by his parents Alfred and Ida Francoeur, and sister Jacqueline.

Many thanks to all our dear neighbours, family and friends who shared their time and love by assisting Bob with rides to medical appointments, yard work, snow removal and baking special treats during his journey, as well as easing his mind that he could no longer do the jobs he so enjoyed doing.

Our thanks and appreciation to all the overworked, caring medical teams, including our family doctor, Dr. Margot McLean and her wonderful team, and Jasper who always greeted Bob with a friendly tail wag and waited for a toss of his favourite toy.