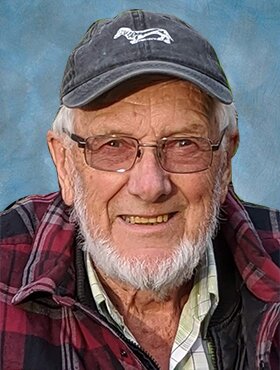 Leo Gellings, beloved husband of Kathleen “Kathy” Gellings (nee Warren), passed away on Saturday, September 17, 2022, at the age of 86 years.

Born in Bassano, AB, on October 22, 1935, to Peter and Mary Gellings, Leo was the youngest of five children. He lived and went to school in the Brooks area, then moved to Calgary after graduation. He took a mechanics course at the Southern Alberta Institute of Technology (SAIT) but was offered a job with AGT as a telephone installer. Leo met Kathleen Warren on a blind date, they became soul mates. True love brought them to the altar on May 28, 1960, then they were blessed with four children, two boys and two girls. Wanting to raise their family in a rural setting, Leo took a transfer with AGT to Vermilion, AB, in 1970. They made a home there for twelve years, all the while enjoying the benefits of central and northern Alberta. Leo took his family camping, fishing, and hunting every chance he could. Teaching them the value of spending quality time together while respecting the outdoors and all it had to offer. He and Kathy, along with their youngest daughter moved to Vegreville in 1982, taking another transfer with Telus, then making a final move to the Lac la Biche area, and settling on an acreage. Leo and Kathy, along with help from family and friends, made a large parcel of land full of trees into their little piece of heaven. Leo counted down the days until his retirement in 1992, using a calendar and bingo dabber, ending a 36-year career. Afterward, to fill some of his time, he took a few part-time jobs along the way. He gave out burn permits for the county of Lac la Biche, delivered new vehicles across the provinces for OK Motors, and replenished oxygen bottles for patients with VitalAire. Leo loved gardening and was well known for his large and productive asparagus patch.

Leo was a kind and gentle soul, always carrying a song in his heart. He was a wealth of knowledge, happy to share and teach along the way. He made a lasting impression on everyone he met, and friends of most. Leo and his wife, Kathy, shared 62 years of love and marriage, the envy of all their family and friends. He was a devoted and loving husband, father, grandfather, and friend anyone would love to have.

Leo is survived by his loving wife of 62 years Kathy Gellings, two sons and daughters-in-law, Brian and Karen Gellings, and Anthony and Toni Gellings; two daughters and sons-in-law, Theresa and James Kushnerick, and Sandra Melenka and Terry Muzechka; eleven grandchildren, and thirteen great-grandchildren, as well as many nieces and nephews. Leo was predeceased by his parents, Peter and Mary Gellings; two brothers and one sister-in-law, Richard and Lois Gellings, and Bernie Gellings; and two sisters and brothers-in-law, Agatha and Robert McClelland, and Frances and Noel Benoit.

A Celebration of Leo’s Life will be held at a date and time to be determined. Condolences, memories, and photos may be shared and viewed here. If friends so desire, memorial tributes may be made directly to the charity of the donor’s choice.

Share Your Memory of
Leo
Upload Your Memory View All Memories
Be the first to upload a memory!
Share A Memory