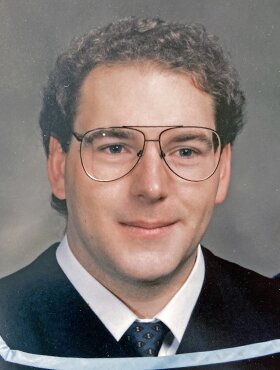 Wes Buchanan, Beloved husband of Teri Buchanan, of Calgary, AB, passed away on Monday, September 19, 2022, at the age of 59 years.

Besides his loving wife, Wes is survived by his son Chris (Kristi) and grandson Grayson of Airdrie, Alberta.

Wes is also survived by his brother from another mother Ron Varley (Wendy) of Tsawwassen, BC, sisters Vicki Mark (Dan) of Langley, BC, and Wendy Hawitt (John) of Calgary, AB, his brother Corey Sullin and his Mother Faye Buchanan of Williams Lake, BC, as well as numerous nieces, nephews, cousins, and friends.

Wes was predeceased by his father Gerald Buchanan, and his sister Terry Tyab.

Wes grew up in Surrey, BC before the family moved to the Chilcotin region of BC, followed by Williams Lake, BC, where he and Teri met.

Wes and Teri moved to Vancouver with newborn Chris in 1986 so Wes could follow his dream of attending University. Wes completed his Bachelor of Science at the top of his class in computer engineering at the University of British Columbia in 1991.

Wes worked in the forest industry programming sawmill equipment and moved to oil and gas after the family moved to Calgary, AB in 2001. He always said he hated traveling but has been all over the world for work.

Wes was an avid skier, cyclist, and hockey player for many years. He had a passion for music, especially live music; he would drive for hours to see a show. Wes loved to listen to music and create his own and was often heard strumming his acoustic guitar. Wes also instilled a love of music in his son Chris.

Wes has been a gamer for many years, starting with board games and moving to online games where he has maintained a circle of friends through the decades as well as welcoming new friends online.

Funeral Services will be held at McInnis & Holloway (Fish Creek, 14441 Bannister Road SE, Calgary, AB) on Friday, September 30, 2022 at 3:30 p.m. Reception to follow in the Hospitality Centre at the Funeral Home. Condolences, memories, and photos can also be shared and viewed here.

Share Your Memory of
Gerald Wes
Upload Your Memory View All Memories
Be the first to upload a memory!
Share A Memory
Send Flowers