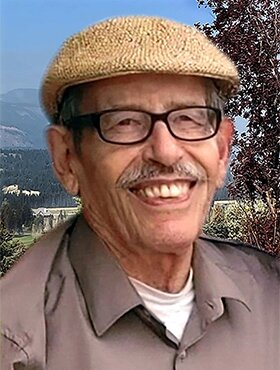 Ellard was born to Thomas and Florence Dagg in Portage-du-Fort, QC, on March 8, 1932. He was raised on a farm in Portage along with his two brothers and three sisters, where he learned to work hard but also play hard.

Ellard served with the Canadian Armed Forces and spent time in Korea. Upon his return, he married his sweetheart “Hope Bowie” and had five children, Murray, Anne, Gary, Paul and Greg. Over his lifetime, he primarily worked in the mining and transportation industries.

Ellard enjoyed his family and the great outdoors. RV’ing, fishing, hockey, golf and sports, in general, were his passion. He also loved to walk and, in his later years, took up a few paper routes so that he could get out to walk. A game of pool, cards and crokinole were also some of his favourites. He was very loyal and dedicated to friends and family, having learned that from being a lifelong Toronto Maple Leafs fan. Ellard loved to dance and could be found on the dance floor right up to the week preceding his passing. He never wanted to miss the opportunity to dance, especially at the Watergrove Club House in Arbour Lake and, in recent years, the Legion in Bowness, where he made many new friends.

Ellard’s favourite saying was, “Did I ever tell you the story about…”. He was such a great storyteller which we will surely miss! He will be most remembered for his quiet and caring disposition.

Ellard is survived by his daughter and son-in-law Anne and Frank Desmeules of Calgary, AB; sons, Gary of Chestermere, AB, Paul of Kamloops, BC, son and daughter-in-law Murray and Betty Dagg of Chestermere, AB. Ellard is also survived by his nine grandchildren, Melanie, Jeff, Curtis, Holly, Shelby, Bonnie, Barry, Kevin and Stephen, and their respective spouses, along with many great-grandchildren in both Alberta and British Columbia. Ellard was predeceased by his loving wife Hope Dagg (nee Bowie) in 2017 and his youngest son Greg in 1992.

In honour of Ellard’s wishes, there will be no formal funeral service. A private family memorial will be held in Calgary following his cremation. Ellard’s final place of resting will be in Portage du Fort/Bryson, QC, where he will join his wife Hope and son Greg. Condolences, memories, and photos can be shared and viewed here.

Share Your Memory of
Ellard
Upload Your Memory View All Memories
Be the first to upload a memory!
Share A Memory
Send Flowers