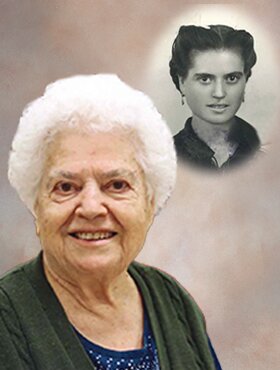 Leona was born in Bova Marina, Italy on January 1, 1928, and was raised on a farm close to Palizzi Superiore. On March 27, 1947, she married her love, Luigi Priolo. Luigi and Leona immigrated to Canada under the sponsorship of Luigi’s sister, Catherine Serani, and arrived in Canada on a cold winter day in February 1950, with their one-year-old daughter, Carmela. Within the next few years, they were blessed with three more children, Frank, Maria, and Angela. In 1959, Luigi and Leona took their family back to the old country, but soon after arrival, Luigi had a change of heart and they returned to Calgary the following year. After Luigi’s sudden passing in 1977, Leona lived the rest of her years in Bridgeland, Calgary, surrounded by her community of close-knit family and friends.

Leona was a devoted, loving, and giving wife, mother, sister, grandmother, aunt, and friend to so many.  She cared deeply about everyone in her life, never forgot a face, and treated all with genuine kindness. She celebrated our joys and was sensitive to our challenges. She was generous, loving, and compassionate. Her passions included gardening, creating beautiful meals, feeding everyone who stepped through her door, and walking to Chinatown for her favorite food. Most of all, she loved spending time and celebrating special moments with family and friends.

If friends so desire, memorial tributes in Leona’s name can be made directly to the Calgary Food Bank, 5000 11 Street SE, Calgary, AB T2H 2Y5, www.calgaryfoodbank.com/, 403-253-2059, a most fitting gift to carry on her tradition of giving love through giving food. Condolences, memories, and photos may be shared and viewed here.

Share Your Memory of
Leona
Upload Your Memory View All Memories
Be the first to upload a memory!
Share A Memory
Send Flowers