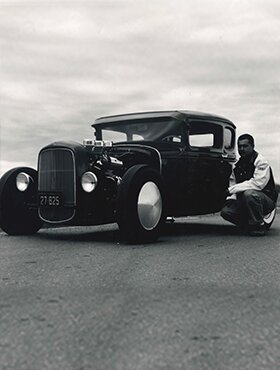 It is with great sadness that the family of Bernie Schaeffler announces his passing on September 26, 2022 at the age of 85.

Bernie was born in Bruno, Saskatchewan on January 11, 1937. He moved to Calgary in 1960 and married Lynne in 1961. He was a founding member of the Saskatoon based Draggins Car Club and was passionate about hot-rods and car runs.

He was an original member of Crooked Narrows Fishing Club, which maintained a fishing camp at Lac LaRonge, Saskatchewan, where many a pickerel and jack succumbed to his fishing skills. There was not a rink too cold or too far to prevent his attendance to watch his son, then grandkids play hockey. He never missed a grandchild’s performance of any kind

Bernie is survived and missed by his loving wife Lynne; his daughter Tracy (Tim); his son Todd (Shelly); and his grandchildren Jaye, Casey, Sydney, and Brett.

Private family services will be held followed by a Celebration of Bernie’s life later this year. Condolences, memories, and photos may be shared and viewed here.

Share Your Memory of
Bernie
Upload Your Memory View All Memories
Be the first to upload a memory!
Share A Memory
Send Flowers