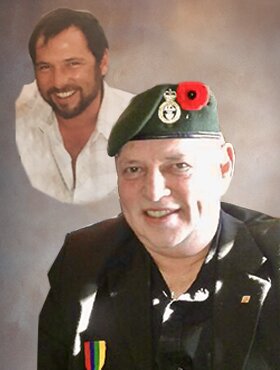 Ricky Malone, beloved father of Ryan and Ian Malone of Calgary, AB, passed away on Sunday, October 23, 2022, at the age of 66 years.

Ricky was born in Ottawa, ON, on January 7, 1956, to William and Mildred (Nee Nelson) Malone. He joined the Canadian Armed Forces in 1975 and was stationed in Calgary, AB, as a member of the Princess Patricia’s Canadian Light Infantry, where he deployed on a UN Peace Keeping mission to Cypress in 1978. After serving in the CAF, Ricky had a long career with Canada Post where he delivered mail, rain or shine, as a Letter Carrier.

Ricky and Deborah were married in 1978 and had two sons together. Ricky was an avid nature lover who had a passion for downhill skiing, tennis, camping, white water rafting, as well he was an accomplished swimmer and aqua fitness instructor. He was also a lifelong collector of Militaria and enjoyed reading as a pastime.

Ricky traveled extensively throughout Asia, Europe and the Middle East, as well as throughout Canada, including multiple family trips where he explored the vast nation with his loved ones.

Ricky is survived by his two sons, Ryan and Ian Malone; daughter-in-law, Kristi Malone of Calgary, AB; and will always be remembered by his siblings, Tommy, Christina, Maria, and Roma, and their loving families. Ricky was predeceased by his parents, Mildred Macdonald (nee Nelson) and William Malone.

Ricky will always be fondly remembered by his infectious smile and sense of humour.

Share Your Memory of
Ricky
Upload Your Memory View All Memories
Be the first to upload a memory!
Share A Memory
Send Flowers