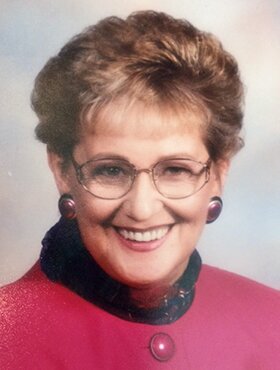 Lois Kotovich of Claresholm, AB, passed away on Tuesday, November 1, 2022 at the age of 78 years, leaving a devastated husband, Ed.

She is survived by her daughters, Michele (Ron) Boyce of Toronto and Tracey (Todd) Payne of Calgary; two beloved grandchildren, Zach and Kayley Payne; sisters, Ann (Frank) Wilson of California, and Judy (Mike) Cooper of Calgary; sister-in-law, Sonia Kiceluk of Calgary; as well as numerous nieces, nephews and Ed’s children. Lois will also be remembered by life-long friends, Mavis, Karen, Joan, and cousin Jen. She was predeceased by her brothers, Jim and Jack Lardeur.

Lois worked as a paralegal for many years until retiring from the Alberta Government on disability. We all admire Lois’ strength and courage in battling MS for several decades. She enjoyed quilting, card making and crochet until her declining health robbed her of those pleasures, being replaced by reading and playing games on her tablet.

As per Lois’ wishes no service was held. Condolences, memories, and photos can also be shared and viewed here.

The family extends their thanks to the staff of the Claresholm hospital for their care and support.

Share Your Memory of
Lois (Ginn)
Upload Your Memory View All Memories
Be the first to upload a memory!
Share A Memory
Send Flowers