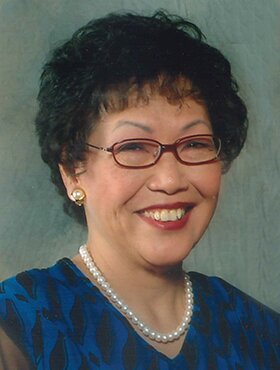 Sally was born in Hong Kong on April 10, 1938. Sally grew up during the turbulent times in post-WWII Hong Kong. She left Rose English High School and joined Miramar Hotel as a telephone switchboard operator. Her quick wit, versatile language skills, and cheerful personality won her many friends and accolades. The saying at the office was, “When the going gets tough, find Sally!” over the years she rose through the ranks of senior management.

In 1960, Sally married Alexander Hon Tung Wong and started a family. Raising two boys amid a busy career was a balancing act, and as a devoted mother, she found time to teach and understand her children. Their best buddies became her connections. Today, one might label Sally as a ‘drone parent’ who observed from a distance but never intruded as the helicopter cousin would. Every week during the summer, the family would spend quality time together on the beach where the young kids learned to swim.

In 1990, Sally moved to Calgary, and started a new phase of her life, after her husband passed away almost a decade earlier Sally re-discovered herself with new hobbies like ballroom dancing and singing. She became an active member of the United Church in Chinatown. She also became inseparable from her new partner John who shared many common interests. They would travel the world to Europe, Alaska, and Egypt where she collected souvenirs of caps, coffee cups, and other trinkets to deposit into Ken’s household when she visited California.

From humble beginnings, Sally had lived a rich life of adventure, persistence, love, and devotion. Her magnetic personality attracted friends at every stop of her journey, her smile was genuine, and her happiness was contagious. Her cheerfulness will forever be remembered and sorely missed.

Sally is survived by her sons, Frank of Calgary, AB, and Ken in California, USA; and her grandchildren Alex, Kristen, and Samantha.

Those wishing to pay their respects may do so at McInnis & Holloway (Chapel of The Bells, 2720 Centre Street North, Calgary, AB) on Sunday, November 6, 2022, from 2:00 to 5:00 p.m. Condolences, memories, and photos may be shared and viewed here.

Share Your Memory of
Sally
Upload Your Memory View All Memories
Be the first to upload a memory!
Share A Memory
Send Flowers