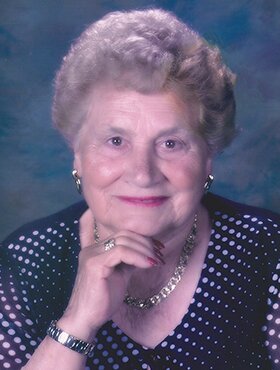 We are sad to announce that Grace De Marco of Calgary, AB, passed away peacefully on Friday, November 4, 2022 at the age of 97 years.

Grace was born on May 3, 1925, in Miglianico, Italy to parents Maria and Antonio Pialetti. She had four sisters and two brothers, all of whom she outlived.

In 1947, Grace married the love of her life, Nicola De Marco and started a family. In 1952, Grace immigrated to Canada to join Nicola who had arrived nine months prior. As immigrants, together they worked hard to build a life for each other.  In later years, Grace and Nicola would travel with family, friends and sometimes just their grandchildren.

In 2002, Grace was devastated by the loss of Nicola. She continued living a full life of traveling, she enjoyed cooking, roaming around in the garden, taking walks and spending time in the company of her family and friends.

We will be celebrating Grace’s life in a private funeral.

Condolences, memories, and photos may also be shared and viewed here.

Share Your Memory of
Graziella
Upload Your Memory View All Memories
Be the first to upload a memory!
Share A Memory
Send Flowers