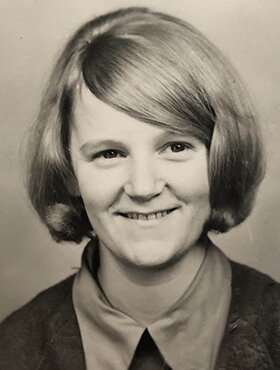 Doreen was born in Glasgow, Scotland, on August 8, 1946. She grew up in Springburn in north Glasgow and attended University of Strathclyde.

Doreen loved travel, a passion she passed on to her family. In 1966, Doreen travelled to and worked in Toronto, where her brother Alan lived at the time.

Two years later in 1968, Doreen and her lifelong friend Tricia Kean journeyed across Canada to Vancouver before turning south along the west coast of the United States, stopping in San Francisco and Los Angeles and eventually reaching Mexico City.

Doreen moved back to Scotland where she met John Gradon at the Glasgow Evening Citizen Newspaper, where they both worked. They were married on April 24, 1971. They moved to England and lived in Berkshire west of London, where they had a son, Stuart.

Doreen immigrated to Canada with her family in 1982, settling in Calgary, where she quickly developed a wide network of new friends while working as a manager at Commercial Union, thanks to her gregarious and kind nature. Often the life of the party, Doreen proudly hosted many Christmas and New Years Eve celebrations with family and friends.

Upon retirement in 2005, she and John moved to the Okanagan  where they had many great years together living in their dream home, a cabin by the lake.

Doreen loved to laugh, even when telling funny stories and jokes at her own expense. At family dinners, she would have the entire table roaring with laughter, tears streaming down as she recounted stories (trademark Glaswegian accent intact decades later).

An avid supporter of Rangers Football Club, she had fond memories of traveling to Ibrox Stadium with her father to watch her team play.

She was a loving daughter, helping look after her parents when they also chose to move to Canada in their retirement.

Nothing pleased her more than spending time with her granddaughter Raina, who she proudly saw grow to adulthood, and grandson Malcolm, who she was able to spend precious time with after moving back to Calgary in early 2022.

Doreen is survived by her son Stuart, daughter-in-law Jamie, granddaughter Raina Gradon-Jones, grandson Malcolm Gradon, and brother Alan Jones. She is predeceased by her husband John Gradon, and parents John and Isa Jones.

Funeral Services will be held at McInnis & Holloway (Fish Creek, 14441 Bannister Road SE, Calgary, AB) on Sunday, November 13, 2022 at 10:00 a.m. Reception to follow in the Hospitality Centre at the Funeral Home. Condolences, memories, and photos can also be shared and viewed here.