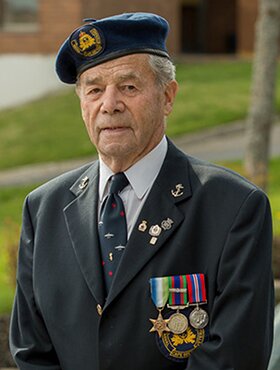 It is with deep sorrow and heavy hearts that we, the family of Stan MacPhail, announce his passing on Tuesday, November 8, 2022.

Growing up in South Bar, Stan was one of seven sons of the late Colin and Laura MacPhail (nee MacIntyre). Stan will be greatly missed by his two daughters, Deborah (Glen) Clark, and Lynda (Robert) MacLellan, both of Calgary, AB; loving brother Walter (Marcella) MacPhail, of Sydney, NS; grandchildren, Jennifer (Brett), Sean, Natalya (Josh), Liam, and Emma; and great-grandchildren, Liam, Paige, Quinn, and Raeleigh. Besides his loving wife Jennie of 72 years, Stan was predeceased by his sister Lola and brothers, Joseph, Robert, Dempsey, Sidney (Brud), and Lloyd. Sadly, Stan was also predeceased by his beautiful granddaughter Jesena.

Stan is a hero to his family and country serving in Canada’s Merchant Navy during World War II. He remained an active veteran in the community and member of the Branch 12 Legion, Dorchester Street. Poppy donations, food drives, parades, school visits, fundraisers, and classroom talks were all things he kept busy doing, wanting to teach about war times and the importance of compassion for others. A school in Calgary has named their annual Veterans’ Food Bank ‘Stan’s Food Drive’ in his honour. Stan was a member of the United Heritage Church in Sydney and a former member of the First United Church, where he enjoyed being an active part of the Monday Night Men.

Stan was a devoted surveyor at the Sydney Steel Plant for 42 years and was respected by those who worked beside him. He had a keen eye for design and a sharp mind for numbers. Building his dream house after beating cancer at 81 and cruising Cape Breton in the 1928 Model A Ford led to rich experiences for Stan and Jennie in their 80’s. Committed to staying fit and active, Stan golfed, curled, swam, went to the gym, and walked well into his 90’s. He enjoyed all sports as a spectator, especially a passion for boxing and horse racing.

Stan was a storyteller and a prankster, as his good buddies who met on Saturday mornings at the Mayflower Mall knew well, being on the receiving end of his tall tales and frequent pranks. Known for his cooking, Stan’s family will miss his delicious ginger snaps, tea biscuits, apple pies, and spicy spaghetti. Stan’s final years were spent in Calgary with his daughters and extended family. He enjoyed family get togethers, neighbourhood gatherings on the deck, card games, car rides in the Model A, antique car shows and snuggles with family pets.

The family remembers Stan as a strong man. He wasn’t loud and he didn’t like the spotlight, but he was always quietly doing good behind the scenes, making a difference through kindness and love. Stan’s lessons for the family were to work hard and be kind to everyone. His final wish was to express that he lived a fulfilled and joyful life. Stan’s family is grateful that his wish to remain at home was made possible by loving family members and a supportive palliative care team.

A memorial service will be held at a later date in Sydney, Nova Scotia. Words of comfort, memories, and photos can be shared and viewed here.

Share Your Memory of
Stanley
Upload Your Memory View All Memories
Be the first to upload a memory!
Share A Memory
Send Flowers