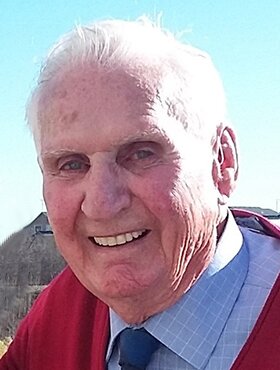 It is with heavy hearts that we announce the passing of Robert Howard Jackson (Bob) Elliott, 10 days after celebrating his 95th birthday.

Bob was born on October 31, 1927, in Camrose, AB, as the second son to parents Howard and Josephine Elliott; and younger brother to Redmond.

Living in such close proximity to Camrose put Bob in a unique position to experience growing up in both an urban and rural environment, each having a major influence in shaping his life interests.  Bob was equally capable in a boardroom wearing a suit and tie to present geological prospects to executive management; or alone in the barn helping introduce life to a newborn calf… sometimes while wearing that same suit and tie.

After graduating high school in Camrose at the top of his class, Bob enrolled in the Geology faculty of the University of Alberta to pursue a Bachelor of Science degree in 1946. Bob earned that degree with Honours in 1949 and later continued his post-secondary education after being invited to the Colorado School of Mines, where he graduated with a Master’s Degree in Geology and Geological Engineering.

Bob’s lifelong adventure began in a pack-horse camp, mapping formations in the remote mountain passes around Jasper, Alberta.  Until his retirement in 1985 he spent a rewarding career with Imperial Oil, Consolidated Mic Mac Oils Ltd., Hudson’s Bay Oil and Gas and Canadian Homestead.

While living in Edmonton Bob met his love, Evelyn May Thompson, and they were married on November 8th, 1958.  The couple raised two children, Robin May and Charles Russell.  In 1963 Bob and his family relocated to Calgary, settling in the community of Brentwood.  In the early years, he and Evelyn built a summer cabin at Pigeon Lake and it was here that he first passed on his love for water skiing to his kids, teaching them and many others to ski.  Water skiing was a pastime that he continued to enjoy, well into his 75th year.

A farm boy at heart, Bob bought land at Cochrane Lake where he raised Charolais cattle.  In 1972 the family moved to an acreage in Bearspaw where he continued to raise Salers, another French breed.  Bearspaw was an ideal place for Bob, with a view of the mountains, a short commute to the office and offering plenty of the simple life that he always appreciated the most.

Bob was an avid curler, a recreational golfer and enjoyed both snow and water skiing, playing and watching hockey. Bob possessed a remarkable intellect, an incredible memory and was a voracious reader.  He was a true adventurer and explorer having sailed through the Strait of Magellan and around South America’s Cape Horn.  Twice he had booked passage on merchant container ships and sailed across the Pacific Ocean to Australia.  His favourite mode of travel was as a passenger aboard the Tall Ships.

Bob was predeceased by Evelyn, his loving wife of 30 years, his brother Redmond and son Charles.

After the loss of his wife, Evelyn, Bob felt blessed to find a kindred spirit in Patricia Smart, a much-loved companion, confidant and inspiration over the next thirty years of his journey. Bob and Patricia had wonderful times travelling around the world together.

Bob is survived by his daughter, Robin Beatty (Barry), daughter-in-law, Brenda Elliott, grandson Justin Elliott; all of Calgary, grandson Russell Elliott (JoHana) of Victoria, BC and Patricia Smart, of Edmonton.  Also mourning the loss of their “Uncle Bob” are many nieces and nephews.

The family will be hosting a casual Tribute Ceremony for Bob on Sunday, November 27, 2022, at 11:00 a.m. at McInnis & Holloway’s (Crowfoot Chapel, 82 Crowfoot Circle NW, Calgary) where friends and family will be warmly invited to share their memories, pictures or offer personal tales of Bob Elliott that they’ve collected over the course of his long, colourful life. Family and friends who are unable to attend in person are invited to join Mr. Elliott’s service streamed live (see below) on the day of the service. For those who are unable to view live, a recording of the service will be posted. Condolences, memories, and photos can also be shared and viewed here.

There will also be a luncheon gathering in the Heritage Room at the Bearspaw Lifestyle Centre, 253220 Bearspaw Road, following the Tribute Ceremony.

In lieu of flowers, a donation may be made to the charity of your choosing.

Click here to view the service folder for Robert Elliott